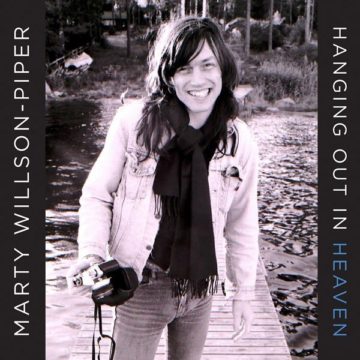 Hanging Out In Heaven was Marty Willson-Piper’s fifth solo album, and originally released in 2000. Now keep in mind that he was still working with The Church at this time, as well as other bands. In between all of that he had time to create this brilliant album. Although Willson-Piper is one busy guy, his music has never suffered in quality. For this release, Hanging Out In Heaven makes its debut on vinyl (blue vinyl at that) and was released for Record Store Day. To make it even more attractive to collectors, Willson-Piper has added one previously unreleased song (“Queen In Her Jeans”) and an obscure EP track (“Dressed Up As You”).

This is a stunning album. Pure and simple. Fans of Willson-Piper will be familiar with Hanging Out In Heaven, as it is regarded as one of his classic solo albums. Given how good it sounds on vinyl, I am a bit surprised it has taken 19 years for this album to make it to that fine format. Hanging Out In Heaven sounds like it was made for vinyl. The warm textures, the layered sounds, and the wonderful harmonies, sound better today than the did in 2000. In fact, this album has simply not aged. Time has finally caught up to this masterpiece.

Psychedelic, mellow, folky, are a few words to try to describe this album. He does wear his influences on his sleeve at times, such as in “Goodbye”, which  sounds as if it was influenced by The Beach Boys, with its chilling vocals. Add to that the aching “Time has come, upon the sinking sun. Goodbye”, and you have a classic song. A perfect combination, painful and beautiful. That in some small ways sums up this album. Each song is dedicated to a person and location. It is a deeply personal album, and one which many could relate. Listen to layered sounds of “After Eight”–sad and scary at the same time. It would have fit nicely on The Beatles (aka The White Album).

Willson-Piper’s voice is perfect to set the mood and his production and arrangements are quite flawless. Playing most of the instruments himself, Willson-Piper creates mini symphonies and equally at home with a simple piano and guitar arrangement. He does have sporadic help from Patti Hood-Lindsey (harp), Keith Joyner (guitar), Andreas Ahlenius (piano, footsteps, creaking), Christer Bjorklund (drums) and Shep Lonsdale (drums, organ). They make appearances here and there on certain songs and they provide excellent back-up. But this is Willson-Piper’s vision and his music.

As far as rereleases go, this is outstanding. It is beautifully packaged in a gatefold sleeve, with a new front sleeve design. Lyrics and very informative notes are included. A great deal of care went into this package, and it is easy to see that Willson-Piper’s record collecting influenced him. He has a solid understanding of what fans will expect and value.

Hanging Out In Heaven is a classic album and I, for one, am glad to see it getting attention again. This is pop/rock/music at its finest. It is a timeless album full of brilliant songs that all flow together in an almost dreamlike state. Welcome back, Hanging Out In Heaven.

Born and raised in Whitby, Aaron discovered music through his love of The Beatles. This led to a career in radio, writing for various publications, and ultimately a radio show about The Beatles (Beatles Universe), which ran for over four years. When not immersed in music, Aaron enjoys spending time with the loves of his life -- his wife Andrea, and daughters Emily and Linda (all of whom have an intense love of music too).
RELATED ARTICLES
album reviewalbum reviewsfeatures
8.0