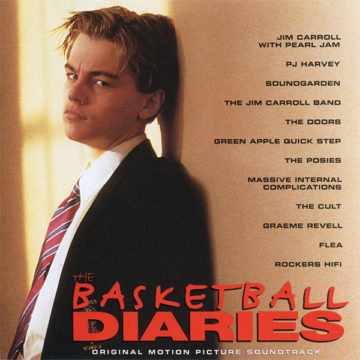 Soundtracks fall into two categories. There are the original soundtracks, which are usually instrumental music written specifically for the film, and then there are collections of songs featured in or inspired by a film. The Basketball Diaries – Original Motion Picture Soundtrack falls into the latter category. There have been some fantastic soundtrack albums comprised of a collection of songs over the years–think any John Hughes film for example. As a compilation,  The Basketball Diaries – Original Motion Picture Soundtrack is pretty good with some fantastic songs. But when one tries to capture the essence of the film and of a time, I am not so sure it succeeds. Other films have done an excellent job at capturing an era.  But The Basketball Diaries – Original Motion Picture Soundtrack falls short in this goal and winds up being a very solid collection.

This new version, first time on vinyl (basketball orange vinyl to boot) has also been remastered but no new additions from the original CD release of 1995. It was originally released for Record Store Day.

The film is a dramatization of Jim Carroll’s early life, played by Leonardo DiCaprio. It was based on Carroll’s own book and does not really stray from the original text. So, of course, there are a couple of Jim Carroll songs, including the hit “People Who Died”. Thankfully the powers that be used the original version by The Jim Carroll Band (from Catholic Boy, 1980). The album also features Carroll reading some of his work with Graeme Revell (SPV) providing some very nice background. Perhaps one of the best things about this soundtrack. However, Carroll’s rerecording of “Catholic Boy” with Pearl Jam seems silly in hindsight and the original would have been much preferred on this album.

There are other artists as well including Soundgarden (“Blind Dogs”), The Posies (“Come Right Along”), The Cult (“Star”) and others. But the standout track is PJ Harvey’s epic “Down By The Water” (from To Bring You My Love, 1995). The song simply steals the show, and fans/collectors will be happy to have Massive Internal Complications’ “Strawberry Wine”, a very interesting song that has its own cult following. As good as the songs are, there is a sense that they were simply thrown together.

For the most part the songs selected are great, but does little for the subject matter. I will not go into Carroll’s fascinating and tragic story but I would have preferred more songs from the late 1970s New York punk/new wave scene. In the end, The Basketball Diaries – Original Motion Picture Soundtrack is a good compilation, which in some ways has dated over the years. However, fans of the album will enjoy hearing it on vinyl and having it available again.

Born and raised in Whitby, Aaron discovered music through his love of The Beatles. This led to a career in radio, writing for various publications, and ultimately a radio show about The Beatles (Beatles Universe), which ran for over four years. When not immersed in music, Aaron enjoys spending time with the loves of his life -- his wife Andrea, and daughters Emily and Linda (all of whom have an intense love of music too).
RELATED ARTICLES
album reviewalbum reviews