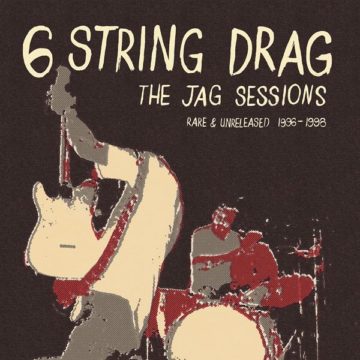 There are artists and bands that reach almost mythical status, and Kenny Roby And 6 String Drag is in that category. They released a handful of albums and developed a very loyal, core following. Fans were always aware of unreleased gems and hard to find CDs. Some lucky fans may even have some recordings of some of the songs, but here, finally, some of these songs see the light of day. The Jag Sessions: Rare And Unreleased 1996 – 1998 are recordings made by the band as demos for a potential record deal with Columbia Records. Some of the songs are demos of songs that the band had hoped to work into more complete recorded versions. Although released on CD, The Jag Sessions: Rare And Unreleased 1996 – 1998  finally makes its vinyl debut, the way the songs were meant to be heard.

Anyone familiar with their other albums will welcome this into their collections. This is stripped down Kenny Roby And 6 String Drag and it is excellent. I am not saying that their other albums were overproduced, quite the opposite, but here the listener gets a front row seat to some fine country music. There is an intimacy here, as if you are sitting in a living room while they play their own brand of Americana.

Keeping in mind that these recordings are now 20 years old, they sound brilliant. Kenny Roby And 6 String Band were a bit ahead of the curve. They split up just as Americana music was given a name and certain radio stations embraced that style of music. But their impact on that genre of music is still being felt.

Listen to “Trouble On Jackson’s Farm”, beautiful playing, acoustic, melancholy and social commentary all rolled into seven minutes. It is an astounding song and the only way to end the compilation. But the other songs are just as good as just as relevant. The musicianship is tight, the melodies beautiful and the songs are lyrically sublime.

Some of the songs have surfaced on Roby’s solo albums, but on The Jag Sessions: Rare And Unreleased 1996 – 1998 you get to hear them in early formation and in some ways they are better than the final released, more polished versions. A great example of this is “Mercury’s Blues”. Here the song has a harder edge, and is a band effort. Roby’s solo version, while great, has too many effects in the song that actually distract.

Roby is a genius and his work with 6 String Drag is the stuff of legends. Although they perform together every now and then, this album serves as a reason why they should be more consistent in staying together and playing such brilliant music.

Born and raised in Whitby, Aaron discovered music through his love of The Beatles. This led to a career in radio, writing for various publications, and ultimately a radio show about The Beatles (Beatles Universe), which ran for over four years. When not immersed in music, Aaron enjoys spending time with the loves of his life -- his wife Andrea, and daughters Emily and Linda (all of whom have an intense love of music too).
RELATED ARTICLES
album reviewalbum reviewsschoolkids records
8.0