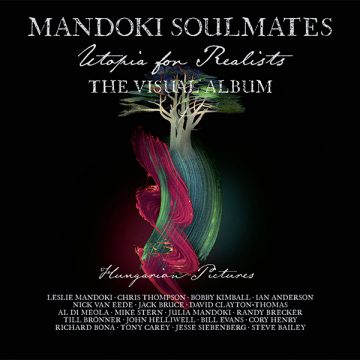 Leslie Mándoki (Mándoki László) was born in Budapest, Hungary and had to flee the country in 1975 to Munich, West Germany to avoid persecution from the Communist regime for his participation in the student opposition. He had been imprisoned 17 times before leaving Hungary, with future Rugrats creator Gábor Csupó.  When he was young, he had studied drums and percussion at the Budapest Musical Conservatory, and had become a respected musician. In Germany, he continued to develop as a part of the successful Dschingus Khan, and by 1993 he formed Madoki Soulmates. There have been many incarnations of the group.

Utopia For Realists is the most recent release for this collective. The CD is accompanied by the Blu-ray Hungarian Pictures. As with previous albums, this is prog rock at its finest. Mándoki mixes classical, jazz, rock and pop to create his own form of prog rock. Some of the tracks are very long, such as “Transylvanian Dances”, which clocks in at 26 minutes. But it is broken into many parts, which keeps it very interesting and engaging. One can clearly hear classical influences, whereas the emotional “Return to Budapest” leans toward jazz and pop. Featuring vocals from Ian Anderson, it is also lengthy but again, it is beautiful and full of changes. And just to keep things interesting “You’ll Find Me In Your Mirror” is a more standard short pop piece, again, extremely beautiful and moving.

Mándoki has brought together a great many artists, but what he does is not so much create a supergroup but a whole new entity. The Soulmates is a band, and what Mándoki has done is something extremely original, and keep in mind, this is not the first such project.

Utopia For Realists: Hungarian Pictures is a brilliant project. The DVD, the concert film of 2019’s 30th anniversary of the fall of the Berlin Wall  and the making of the , is quite wonderful and well worth watching. The CD is a beautiful example of the power of music and what can be done in the prog rock genre. Mándoki Soulmates is a powerful musical force.

Born and raised in Whitby, Aaron discovered music through his love of The Beatles. This led to a career in radio, writing for various publications, and ultimately a radio show about The Beatles (Beatles Universe), which ran for over four years. When not immersed in music, Aaron enjoys spending time with the loves of his life -- his wife Andrea, and daughters Emily and Linda (all of whom have an intense love of music too).
RELATED ARTICLES
album reviewalbum reviewscentury media records
8.0