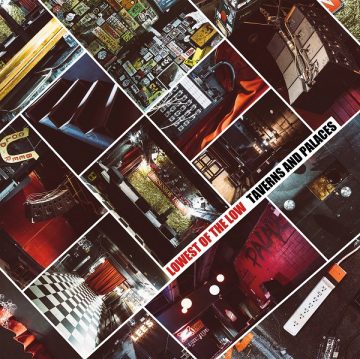 Taverns and Palaces are the places to be for the Lowest Of The Low. 30 years since the epic release of Shakespeare My Butt… and 20 years since Nothing Short Of A Bullet, their last full-length live album release, it just makes sense for the band to release Taverns and Palaces at the dawn of a new live music era. This live album was recorded at the tail-end of 2019 at two Toronto musical landmarks, the Legendary Horseshoe Tavern and at Lee’s Palace, 11 songs from each, during the AGITPOP tour. The band’s second release through Warner Music Canada and Yes Boy Records, Taverns and Palaces was worth the wait.

Although the double-album draws heavily from more recent albums AGITPOP and Do The Right Now, the Lowest Of The Low manage to mix in older favourites and two covers, “Feel It Still” from Portugal. The Man (possibly even better than the original) and The Style Council’s “Walls Come Tumbling Down”. Joining “The Low” intermittently are the soulful The Skye Wallace Band and a horn section, penned by lead singer Ron Hawkins as “The Legitimizers”.

Hawkins and bandmates David Alexander, Lawrence Nichols, Michael McKenzie, and Greg Smith have it dialed-in throughout Taverns and Palaces. Although recorded at two relatively smaller music venues, the sound is large and full.

Highlights are abundant and include “City Full Of Cowards”, “Bit/Letter From Bilbao”, “Powerlines”, “Feel It Still”, and “Night Of A Thousand Guns”.

Recently, in conversation with Spill Magazine, Hawkins remarked “Here’s another thing I love about live records, I feel like the version of “City Full Of Cowards” on Taverns and Palaces kicks the ass of the version on Hallucigenia.” Indeed, it really does.

Lowest Of The Low really hits it out of the park with Taverns and Palaces, capturing their live music experience in a dynamic fashion, with heavy guitars, a horn section and variety aplenty.

John Graham is a Vancouver-area resident who typically spends most days admiring music of all genres. When not listening to music, John is usually at a live show, somewhere in the bowels of Vancouver.
RELATED ARTICLES
album reviewalbum reviewslowest of the low
8.0