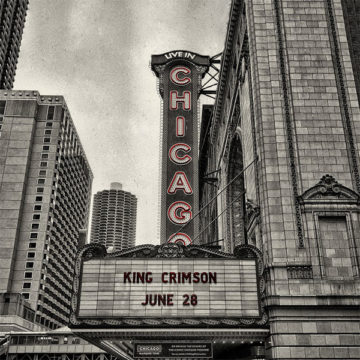 It all began in 1967 when Robert Fripp met up and joined The Giles Brothers (Michael and Peter) and they formed a trio. By 1968, the band had expanded to a six piece, the great Peter Sinfield came up with the name King Crimson, ans their debut album was issued the same year (In The Court of The Crimson King). Fifty years since the formation of that trio, Fripp continues to tour, and very occasionally records, as King Crimson.

Fripp is also an incredible archivist, and Official Bootleg: Live in Chicago, June 28, 2017 is just one of the releases from his Discipline Global Music (DGM) label. If you are a collector of this band’s memoribilia, Fripp takes great care in releasing concerts, studio tracks and other oddities. When they are issued, Fripp makes sure that they are of top quality.

This can be said for Official Bootleg: Live in Chicago, June 28, 2017, a wonderful two-disc set culled from his 2017 tour of North America. This release basically serves as a souvenir for those lucky enough to have gotten tickets, and for the rest to have a pretty good picture of what was missed. It has been well recorded and well mixed and overall, sounds incredible.

Quite a lineup, featuring players who have played with the band at different times of their history. And this band plays extremely well. The musicianship is second to none and there were moments when I had to check that I was not listening to studio recordings. Listen to the cover of David Bowie’s “Heroes”, really stunning, and lovingly recreates the original version. It is perfection. It is also interesting to hear King Crimson cover this song.

As for the rest of the live album, Fripp touches on a great deal of King Crimson history. “21st Century Schizoid Man” (from their debut album, In The Court of the Crimson King) sounds fresh and new, while not losing anything of the original version that makes it so wonderful. It just sounds alive with a different level of excitement. “Starless” (from their 1974 album, Red) comes alive as well, and although lengthy, it works on every level. Levin sounds right at home with their version of “Indiscipline” (from the 1982 album, Discipline, which featured Levin). Most albums  are represented, including their most recent studio recording, 2003’s The Power To Believe (the song “Level Five). Even though the songs come from very distinct eras, the music comes together with this band and makes sense. This is not a retrospective, this is a live performance of tome of the best songs ever written and performed.

Fripp has created a very successful cottage industry and fans/collectors must be delighted that this music is available. Springsteen has taken the cue and has several of his live performances available as well. It is a brilliant way to battle bootleggers, and a brilliant way to archive the history of a remarkably talented individual (Fripp) and incredible band.

Born and raised in Whitby, Aaron discovered music through his love of The Beatles. This led to a career in radio, writing for various publications, and ultimately a radio show about The Beatles (Beatles Universe), which ran for over four years. When not immersed in music, Aaron enjoys spending time with the loves of his life -- his wife Andrea, and daughters Emily and Linda (all of whom have an intense love of music too).
RELATED ARTICLES
album reviewsheroesking crimson
8.0