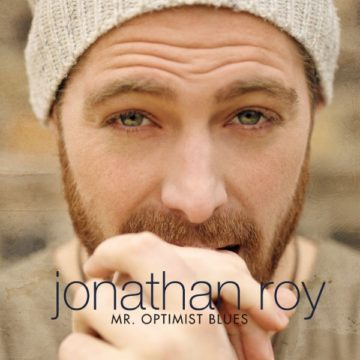 “Pro-athlete-turned-pop-star” isn’t a narrative that you’d typically expect to hear in the music industry, but it’s a narrative that applies to singer-songwriter Jonathan Roy. Roy shows off his vocal and songwriting chops in his new release, Mr. Optimist Blues, which is a simple yet charming record that showcases many different facets of his persona as a performer.

Mr. Optimist Blues is, above all else, versatile. While at its core it certainly is a pop record, it takes several different paths into a couple different styles. The opener, “Daniella Denmark”, is an upbeat folk-rock tune. “You’re My Ace” and “Beautiful Day” are heavily infused with reggae. “Good Things” and “Fly” are down-tempo pop ballads, and then there are the synthier, mellower songs – the title track, “Mr. Optimist Blues”, and “Freeze Time”.

Within this versatility of styles, Roy shows off flexibility in his vocal work as well. Roy demonstrates that he is capable of showcasing many different kinds of emotions in his voice. For example, songs like “You’re My Ace” and “Daniella Denmark” bring out the fun-loving, casually confident facet of his personality, while in “Fly” we get to see a side of him that is more soft, sensitive, and tender. In revealing all these different sides of his vocal presence, Jonathan Roy sends a message that he is truly putting all of himself into the record, and giving us a sampling of all parts of himself.

“Good Things”, the third single off the album, is definitely where Roy shines the most. It is the most raw and the most powerful song on the record, and the most straightforward in terms of lyricism; sometimes in the other tracks, the lyrics get lost a little in favour of musical phrasing or other lyrical ideas, but “Good Things” in particular lays out a strong, clear, and concise narrative that Roy delivers extremely well. His voice begins soft as he laments on a failed relationship – and as the chorus begins, the vocals grows into powerful, booming, and sweeping tones as Roy reflects on once being able to share special memories with his former lover. It’s really easy to feel the anguish and sadness he put into this song, and complemented with the atmospheric strings, thumping percussion, and emotion-charged piano, the narrative of the song is really driven home.

Unfortunately, that kind of delivery (or specifically the emotional and vocal delivery) is rarely seen along the other tracks. That isn’t to say that the rest of the tracks aren’t successful overall, they just lack the same level of performance that Roy delivers in “Good Things”. It’s as if his vocals take a backseat to his production and instrumentation, even while both of those things are still good across the other tracks on the album. This isn’t to say that Roy’s vocal delivery is poor on these songs, they would just benefit greatly from the vocals being emphasized and brought to the forefront a little more.

That being said, other highlights on the album include “You’re My Ace”; the song full of Bob Marley references, which could be interpreted as Roy singing about his relationship with music (as opposed to a woman), and “Fly”, while not having the same level of emotional infusion as “Good Things”, still conveys an endearing and comforting message of empowerment and love.

At only eight unique tracks and clocking in at 33 minutes, Mr. Optimist Blues is a short album, but it certainly is a sweet one. It’s clear that it’s an album Jonathan Roy put his all into, which makes it come off as a raw, genuine, and overall pleasurable listen. If you’re looking for a good, easy pop record to get into, perhaps Jonathan Roy has something for you.

Kysan Kwan hails from Ajax, but is currently in the Music Business program at Berklee College of Music in Boston, Massachusetts. His love for music started in high school, where he went through his "rebellious teen alt-rock" phase before becoming open to all genres of music from EDM to smooth jazz. Kysan also is an enthusiastic concert photographer and has his own college radio show, where he seeks to introduce the American public to the best of Canadian indie.
RELATED ARTICLES
album reviewsflywarner music canada
8.0