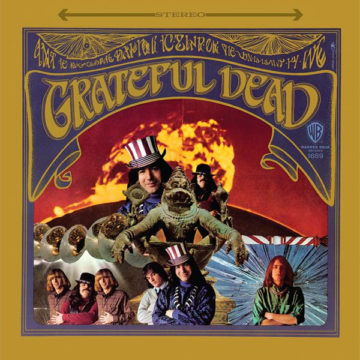 The Grateful Dead’s self-titled debut never really got the credit it deserves. Even the band was quick to dismiss it following its release, as many of the final tracks that made the cut were shortened. For a band that was known for its extensive soloing during live performances, this was a problem. Putting their sound on tape was tricky step for the band as they were pressured from producer, Dave Hassinger to sound more commercial. When the album was first released in March, 1967, the band felt the album didn’t truly capture the sound that they had developed in the clubs of their beloved San Francisco.

But time has been good to The Grateful Dead, and now it holds up with some of the bands’ best work. The fact that the album doesn’t quite sound like the band who recorded Working Man’s Dead or From the Mars Hotel gives it a certain sense of cachet. Tracks like “The Golden Road (To Ultimate Devotion)” and “Cold Rain and Snow” are short, punchy and laced with raw LSD grooviness. However, the album is not without its long-jam tracks. “Viola Lee Blues”, a slow, bluesy track, is the one extended tune that made the final cut giving the listener a glimpse on what would come on albums like Anthem of the Sun and Live/Dead.

Despite many of the tracks being shortened, Jerry Garcia’s psych-rocking Blues licks still cut through and make their mark. His solo on “Cream Puff War” is so brittle and sharp it sounds as if his amp is on the verge of exploding.

Now nearly 50 years after its initial release, Rhino has released it in a deluxe edition. The first disc, of course, is the original album, and captures the bands most stereotypical 60s Psychedelic Rock, with groovy blues back beats and peppy organ licks. The second disc, P.N.E. Garden Auditorium, Vancouver, BC, Canada 7/29/66 is simply a live recording of the band that was prior to making their first record.

While “bonus discs” are often used as cash grabs, this one is worth the money. Recorded over half a year before their debut LP made an appearance, it is a great example of an early Grateful Dead concert, featuring several tracks that would make it onto their eponymous album. The P.N.E. Garden Auditorium recording displays many musical sides of the legendary Haight-Ashbury natives. “Standing on the Corner” shows the band dabbling in Motown-like R&B, while “I Know You Rider” is the perfect mid-60s rocker, ideal for caged go-go dancers shaking their thangs.

As a child growing up in the suburbs, Ryan found music as a way to soothe his boredom. After first hearing AC/DC at the age of 10, he was hooked on music. Tracing its roots to the ‘50s, he became obsessed with Elvis, Buddy Holly and Chuck Berry. Somehow that led to grunge, then psych-rock, then jazz, etc. The list goes on and on and his collection of vinyl records continues to grow.
RELATED ARTICLES
album reviewsjerry garciarhino records
7.0