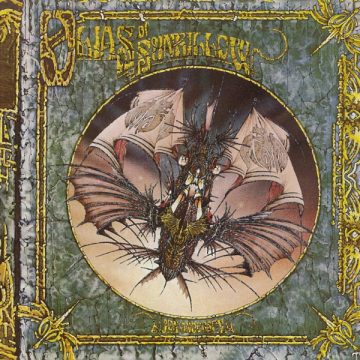 Olias Of Sunhillow by Jon Anderson, originally released in 1976,  was the first solo album by the Yes vocalist. Here he demonstrates that he is much more than just an extremely talented vocalist, playing guitars, harp, sitar, keyboards, percussion, bass guitar, wooden flute, mandolins, and saxophone, with a little help from Brian Gaylor on electronics. Anderson produced the album as well.

It is an impressive debut, and one that sits comfortably with the best Yes albums. Esoteric have remastered it from the original tapes and it has never sounded so good. Although there are no bonus tracks included, there is a 5.1 remastered version, which any fan would enjoy.

It is a concept album created about four fictitious tribes on the planet Sunhillow. While the idea may sound a bit silly and dated, it actually works, especially for science fiction fans. Each tribe is  represented by different types of music, which allowed Anderson to experiment with music and sounds. With the use of creative instrumentals and world music, he brings everything together and the end result is an intriguing album full of incredible music and lyrics.

This is a great reissue of a lost treasure. While Olias Of Sunhillow was a top ten album in the UK, it did not do as well in North America, and it is an album that Yes fans and prog rock fans have held dear to their hearts for many years. Other reissues failed in delivering the album the way that it should, so this reissue is very much welcomed. It sounds and looks good (as the original artwork has been restored). A loving, and carefully restored ‘lost’ masterpiece has been returned to the world.

Born and raised in Whitby, Aaron discovered music through his love of The Beatles. This led to a career in radio, writing for various publications, and ultimately a radio show about The Beatles (Beatles Universe), which ran for over four years. When not immersed in music, Aaron enjoys spending time with the loves of his life -- his wife Andrea, and daughters Emily and Linda (all of whom have an intense love of music too).
RELATED ARTICLES
album reviewalbum reviewsesoteric recordings
8.0