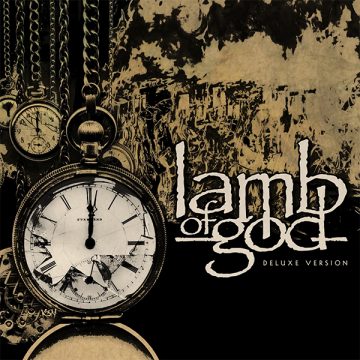 After parting ways with founding member and drummer Chris Adler, Lamb Of God returned in 2020 with their long awaited self-titled record.  Lamb Of God  follows their 2015 album, the jaw dropping VII: Sturm Und Drang which saw the band experiment with tones and songwriting to deliver one of their strongest, and certainly their most unique, release. While last year’s Lamb Of God was a strong album by any standard, it seemed to stray away from the new creative direction of the previous album and resorted to sound very much in style with their early records. Now the band has returned with Lamb Of God (Deluxe Version) that includes two additional bonus tracks, alongside a live album from their 2020 streamed performance making for a great addition to an already strong album.

Front to back, Lamb Of God (Deluxe Version) is a blistering tour de force of sheer, unrelenting metal and the same goes for the pair of new tracks, “Ghost Shaped People” and “Hyperthermic/Accelerate”, the first of which is kicked off by a frenetic intro and verse before cutting into a halftime feel for a massive chorus. The song comes to an even bigger close with a brutally sludgy breakdown. “Hyperthermic/Accelerate” feels slightly more adventurous in the songwriting from its ambient opening to a verse that only Lamb Of God could have written. It features a climatic buildup out of the bridge before diving into a final chorus. Rather than feel like outtakes left on the cutting room floor, both “Ghost Shaped People” and “Hyperthermic/Accelerate” only add to the record, making their initial absence curious.

The live portion of Lamb Of God (Deluxe Version) as recorded during a live stream concert last September. Not only did they perform all ten tracks from the original version of the album, but they also performed classics “Ruin”, “Contractor”, and “512”, as well as the live debut of “The Death Of Us”, a track written and recorded for 2020’s Bill & Ted Face The Music film. As expected, the concert setting only breathes new life into the new material. “Checkmate”, “Gears”, “Reality Bath” (performed in tribute of Power Trip’s Riley Gale), and “Resurrection Man” in particular, are definite highlights that will leave you longing for the day when we can thrash about in the pit once again. Furthermore, “Contractor”, “Ruin”, and “512” are performed masterfully and demonstrates the relentless nature of the band, especially when you consider that these have been thrown in at the end of their set. With a live experience that captures the sound of the band perfectly in a sense of balance while still sounding massive, Lamb Of God remains an incredible live band for its equal measures of musicality and raw energy.

The additional recorded and live material truly creates a more complete experience as the band capitalizes on what was already a massive album. Lamb Of God may have departed on the conceptual and experimental songwriting of their previous album, but Lamb Of God (Deluxe Version) once again asserts the band as the indisputable king of modern metal. Driven by strong and distinctive songwriting and an uncompromising live performance, Lamb Of God was among the greatest metal releases in 2020 and Lamb Of God (Deluxe Version) is well on its way to being the same for 2021.

A passion for music has always been a part of Gerrod’s life. As a young boy, he was raised on a steady diet of the music from The Chili Peppers, Aerosmith, The Stones, Prince, and others from his mum. Raised in the GTA, Gerrod continued to foster his love for music by attending a wide range of concerts and learning the drums. His unapologetic passion for music has no bounds and has spread to a wide variety of styles, whether it be the 90’s rock that sound tracked his teenage years, the jazz he studied in university, or his newfound love for hip-hop. He recently received his bachelors in music and education from York University and is passionate about writing and reviewing good (and less than good) music. Gerrod is also the drummer and songwriter for a Toronto based rock & roll band, One In The Chamber.
RELATED ARTICLES
album reviewalbum reviewsepic records
9.0