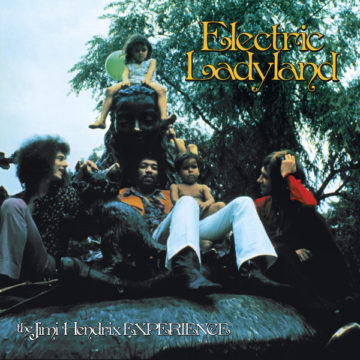 Few albums stand the test of time the way Electric Ladyland has, much like few artists stand the test of time the way Jimi Hendrix himself has. This is despite the patchy production, rampantly over-indulgent improvisation and the musical density of the album as a whole. If anything, this incredible rawness of expression is what characterizes the album the most, showcasing the pure creative brilliance the band, let alone their charismatic frontman, possessed.

In such a light, it almost seems counter-intuitive to celebrate that legacy with the release of a modern remaster. The impact of the cleanliness and clarity of currently available production techniques is certainly hard to miss, especially as it gives the album an edge of sterility that was most certainly absent on the original release. Hendrix’s wild, effect-based expression can at times sound caged in one spot where before the guitar would bleed across the whole sound space of a song, even when his melodies are phasing across the stereo spectrum.

Yet, while the loss of rawness that so characterized the Jimi Hendrix Experience is lamentable, it is arguably a worthwhile compromise (at least in some senses). The cleaned-up bass and drum parts remove much of the muddiness of the original release while providing a noticeable separation of the instrumental parts. This allows for the band’s expression as a whole ensemble to be more accessible, highlighting the brilliance of the exchange and chemistry between the band members throughout. In a way, it makes it easier to ‘get’ the point of the LP as a whole rather than having one’s attention absorbed by the frenetic guitar parts. However, the loss of the original Electric Ladyland’s energy leaves an imbalance that is nonetheless very difficult to justify.

To satisfy those who would thereby be disappointed, as well as to make the 50th Anniversary edition all the more tantalizing to the most ardent Jimi Hendrix fans, the new release includes over two hours of demos, alternate takes and live recordings from a 1968 performance at the Hollywood Bowl (days before the album’s original release date). These recordings lie on the opposite end of the spectrum to the remaster, showcasing the band’s live sound and the range that they as musicians possessed in a largely unaltered and unfiltered presentation. The juxtaposition of multiple takes of several songs, in particular the five versions of ‘Long Hot Summer Night’, further brings listeners into the intimacy of the band’s recording space.

The 50th anniversary edition of Electric Ladyland is thus a fitting celebration of one of the most significant works of modern music, presenting the album from a modern perspective while exposing the full rawness and energy behind the scenes of one of rock’s seminal albums. Though it is true that several of the demos and alternate takes will likely serve as little more than a novelty to most listeners and that the original album is ultimately a more satisfying experience than the remaster, that does little to hamper the immense pleasure of revisiting the masterpiece in a new light.

Based in Montreal but raised across Western Europe, Andrew feels at home both everywhere and nowhere. Having picked up the piano at age four, he has since gone on to add clarinet, saxophone and guitar to his musical arsenal. As well as crafting music, Andrew spends a lot of time listening both at home and in live contexts. Rather than focusing on a particular style or calibre of artist, he is keen to explore music of any shape or size. Outside music, Andrew's passions lie in philosophical writing, visual art and sharing positivity with the world around him.
RELATED ARTICLES
album reviewalbum reviews
8.0