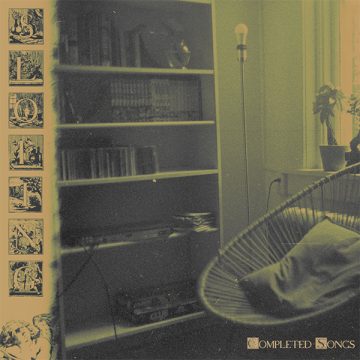 Lead songwriter of the band Scooterbabe, JJ Posway, has released a debut solo album under the name Sloping. It is called Completed Songs, and it is nine tracks of fairly beautiful, but melancholy, ruminating music, grounded in imagistic, non-sequitur laden lyrics that are both engaging and mysterious.

Opening track “Brute Force” sets the tone for the rest of the album, introducing us to the gentle fingerpicking acoustic guitar, rising and falling like the breath as Posway sings slowly, deliberately breaking lines in odd places to great effect. An echoey mix has his voice reverberating, chasing its lagging self around until the last 30 secs or so, when everything dissolves into a pulsating drone that is surprising, and has the effect of reengaging the listener after the dreamy drifting around of the first few minutes. Several songs in this collection follow a similar outro flourish like that and each instance manages to surprise, like someone snapping their fingers in the middle of your daydream.

In an album that explores many personal questions and experiences; “Raft” provides a great example of the ambiguous nature of the lyrics throughout the album. When he asks “Do I treat you awful/When I leave my body?” he poses an evocative question that raises its own additional questions for the rest of us, whose brains are naturally seeking to make sense of it all, which, I will posit here, is the whole point of engaging with music with such artful aspirations: to be active as opposed to passive, and therefore to experience the album in a way that can be as personal for the listener as it is for Posway. Later on in the same track, he sings

“Blue-green paint/
Residue from old tape/
Whether I know or I don’t know/
Resign to wrestle out or outgrow,”

in a series of imagery that seems to takes its cues from modernist poetry.

Overall, these tracks are like-minded and steady, and it’s possible to consider the entire album one long song despite the varied experiences and emotions that are ruminated upon. These songs seem to capture moments of consciousness as they are experienced by memory: fragmented and oblique, pieces pulled together through evocative lyrics that leave it to us to try and fill in the gaps.

That’s a game I’m willing to play for a little while.