SPILL ALBUM REVIEW: JACK JOHNSON – ALL THE LIGHT ABOVE IT TOO 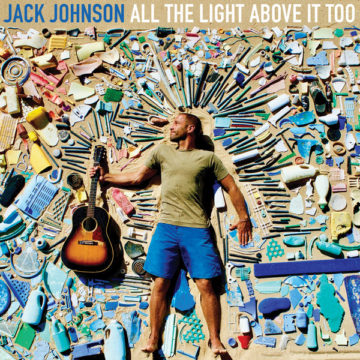 Jack Johnson
All The Light Above It Too
Universal Music

After releasing his number one 2013 album, From Here To Now To You and the subsequent tour which led into the following year, things have been relatively quiet from Jack Johnson.  2013 was also a big year for the singer-songwriter as he headlined the American Bonnaroo festival as well as hosting landmark and intimate performances at London’s Tabernacle on Notting Hill and at New York’s Allen Room. Since then, it appears that, for the most part, Johnson has taken a break from music, likely to focus on his family life and environmentalist endeavours. That is, until earlier this year when he announced his return to the stage. His still ongoing North American tour- along with future stops in South America and Australia- is accompanied with the recent release of All The Light Above It Too, Johnson’s long awaited seventh studio record.

All The Light Above It Too is a clear return to Johnson’s roots. The music is stripped down to the mostly acoustic essentials, and Johnson himself handled most of the instrumentation- including all the guitars, and at times piano and drums- in an attempt to create a feeling of nostalgia and reminiscing for his early four track recordings which attracted major attention and catapulted his career forward. “Subplots”, the album’s opening track, is a clear indicator that Jack Johnson is at his best when he takes this approach.  Like the rest of All The Light Above It Too, “Subplots” is a simple and smooth ride that eases the listener into the gentle swing of things. Tracks like “You Can’t Control It”, “Is One Moon Enough?”, and “Love Song #16” are exercises of song writing minimalism that keep Johnson’s lyrical narrative’s at the forefront beside his simple and crisp guitar work and beautiful song writing. Few artists could write such simple songs that are each overflowing with a level of soulful emotion, yet Johnson seems to do so effortlessly.

“My Mind Is For Sale” is an interesting song. As the record’s lead single, it is bouncy, poppy, and fun. It is also one of the more busy tracks on the record. On the surface, the song is light but the subject matter is clearly directed at Trump. Sonically, this does not sound like a protest song, or one expressing any sort of dissatisfaction, but through a closer listen to the different metaphors and phrases, Johnson has mastered the art of writing a pop track that subtly discusses one’s political beliefs and frustrations in a way that is very much a radio friendly format, thus easily accessible to the public. Similarly, in a musical sense at least, “Gather” is another track that offers a rich and full soundscape of weaving guitars, vast percussion, keys, and bass. The song is among the best that All The Light Above It Too offers simply because of how much it stands out from the rest of the record’s material.

All in all, All The Light Above It Too is a very safe and enjoyable record. In many ways the ten songs across the album feel expected to some degree. This, however, does not take away from the fact that Jack Johnson remains  to be one of the strongest and inventive songwriters of the booming singer-songwriter style,  which he not only emerged from, but is also credited for drastically innovating it. While I would have been nice to hear him push the envelope of the style, All The Light Above It Too is a successful return to his roots which will leave fans excited and more than satisfied.

SPILL ALBUM REVIEW: JACK JOHNSON – ALL THE LIGHT ABOVE IT TOO

Here's what we think...
Spill Rating
Fan Rating
Rate Here
New Criteria
10
14.7
8.0
Total Spill Rating
14.7
Total Fan Rating
8 ratings
You have rated this
Album Reviews
album reviewsall the light above it toojack johnsonmy mind is for saleuniversal music
album reviews, all the light above it too, jack johnson, my mind is for sale, universal music
About the Author
Gerrod Harris

A passion for music has always been a part of Gerrod’s life. As a young boy, he was raised on a steady diet of the music from The Chili Peppers, Aerosmith, The Stones, Prince, and others from his mum. Raised in the GTA, Gerrod continued to foster his love for music by attending a wide range of concerts and learning the drums. His unapologetic passion for music has no bounds and has spread to a wide variety of styles, whether it be the 90’s rock that sound tracked his teenage years, the jazz he studied in university, or his newfound love for hip-hop. He recently received his bachelors in music and education from York University and is passionate about writing and reviewing good (and less than good) music. Gerrod is also the drummer and songwriter for a Toronto based rock & roll band, One In The Chamber.
RELATED ARTICLES
album reviewsjack johnsonuniversal music
10