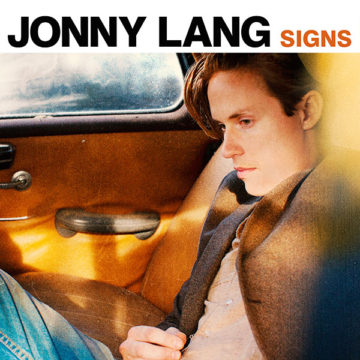 Signs is Jonny Lang’s eighth album, and his first since 2013’s hugely successful Fight For My Soul. Since 1995 Lang has been building a solid fanbase that keeps getting larger with each release. Signs is going to continue in that fashion and bring an even larger audience to his style of the blues.

Lang is a fantastic, brilliant guitarist. And he would have made it with that talent alone. He has also been blessed with a distinct and stunning vocal style that harkens back to old fashioned blues stylings with a very current slant. Retro without being retro. Lang is bringing the blues to today’s world with his style, production and choice of instrumentation. Often sparse, the playing is beautiful throughout by everyone involved.

Signs is jammed pack of classic sounding blues and rock and roll. The music is expertly played  and the arrangements are perfect for the songs. The album opens with a guitar and Lang’s voice. Nothing else is necessary as he tears into “Make It Move”. It sets the tone for the remainder of the album. Until the end Lang’s searing guitar is heard throughout the album, bringing the listener into the past, present and the future.

The music, for the most part, is standard blues with a fusion of rock. Some border metal and some come close to just rocking out, but Lang is always there to bring it back to the roots, the blues. He knows and understands the blues and is able to use his knowledge to structure the songs that are both inviting and biting.

The interesting aspect to Lang’s career is his open and devotion to Christianity. He does not hit the listener over the head with his beliefs, but they are there. Spilling over into more political songs such as “Stronger Together” and songs that are outright Christian, “Into The Light”, a clear highlight of the album. Over the past few releases Lang has been more hard hitting with his beliefs, but here he mixes it in with the rest of the album expertly. Besides, who can resist a strong gospel/blues number with such intense guitar work?

The flow of the album is solid and  very interesting. At times there is a sameness, and the highlights of the album are left to the last three songs. In terms of sequencing, these songs could have been interspersed throughout which would have broken the sameness of the music and added some much need variety.

Having said that, Lang does leave the best to the end. The last two songs, “Wisdom” and “Singing Songs” are both stunning and worth the price of admission alone. Lang’s voice and playing is beyond words and both songs do an excellent job of wrapping the album up and bringing it to a suitable and necessary conclusion. One can only imagine the impact of these songs performed live.

This is an excellent album. It has been a long time coming, but worth the wait. Fans will embrace this record and I think new fans will be attracted to Lang’s distinct style of blues/rock and gospel.

Born and raised in Whitby, Aaron discovered music through his love of The Beatles. This led to a career in radio, writing for various publications, and ultimately a radio show about The Beatles (Beatles Universe), which ran for over four years. When not immersed in music, Aaron enjoys spending time with the loves of his life -- his wife Andrea, and daughters Emily and Linda (all of whom have an intense love of music too).
RELATED ARTICLES
album reviewsconcord records
8.0