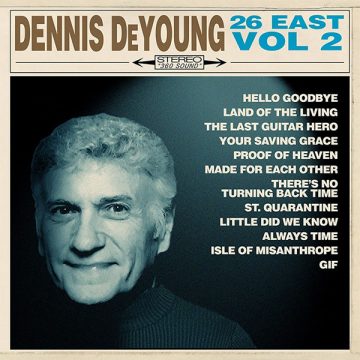 Last year Dennis DeYoung released the album 26 East: Vol. 1 which was originally to be his farewell to the music world. He recorded so much music that he was encouraged to split the project into several albums,which he did, thus we have 26 East: Volume 2. It is is very much a continuation of 26 East, Vol. 1, as it should be. Once again, the former lead singer of Styx enlists some friends, including Rage Against The Machine’s Tom Morello, Survivor’s Jim Peterik and Tim Bales of The Ides of March. The end result is a slick, well-produced album full of ‘classic rock’ sounding songs. For the record, 26 East is the address in which DeYoung grew up in Roseland, Illinois. It was here that Styx formed and he received his musical education.

In saying goodbye, DeYoung wanted to pay respect and acknowledge his influences and his history with Styx. One look at the album sleeve, one knows he was is a huge Beatles fan and the band has had a huge impact on him. He pays homage to Meet The Beatles with the cover design. Musically, this is summed up beautifully in the very Beatley opening track “Hello Goodbye”, which is not a cover but very close. He cleverly weaves familiar melodies into his tribute to the Fab Four and it is not only effective, but is a wonderful way to open the album. The song is heartfelt and one of the finest tributes to The Beatles available.

From there, he taps into the world of Styx, from the hard-rocking songs, such as “The Last Guitar Hero” featuring Morello, to the power ballads for which Styx became synonymous including the beautiful “Proof Of Heaven”, “Made For Each Other” and “Always Time”, which sounds like the sequel to “Babe”. The album is a nice balance of rock and ballads, but it becomes somewhat predictable, which is the only downfall of the album.

DeYoung himself sounds fantastic. His voice has not changed over the years and it is as strong today as it was when the band debuted in 1972. And it is nice to hear him on keyboards. He has never received enough credit for his musical abilities, and this album clearly demonstrates how strong of a player he is. He even returns to the accordion (an instrument he initially played when forming his first band in 1961).

The biggest, and most pleasant surprise on the album is the wonderful, and my favourite track on the album, “The Isle Of Misanthrope”. This is a prog rock journey that is quite remarkable. DeYoung sings a warning of where the world is heading and with that message and the build-up, he has come up with a song that should become a classic. This song leads into a brilliant ending called “Grand Finale”, which of course taps into “The Grand Illusion” and is actually very moving. Knowing that this is his final album, hearing this song brought a tear to my eye. It is also dedicated to the late John Panozzo, the original Styx drummer. A very suitable and moving end to the album.

All in all, it is a very emotional and strong album to bring a musical career to a conclusion. 26 East: Volume 2, as with Volume 1, the Styx album that fans have been wishing for for years. It holds up to any Styx album and, no doubt will and should be embraced by fans.

Born and raised in Whitby, Aaron discovered music through his love of The Beatles. This led to a career in radio, writing for various publications, and ultimately a radio show about The Beatles (Beatles Universe), which ran for over four years. When not immersed in music, Aaron enjoys spending time with the loves of his life -- his wife Andrea, and daughters Emily and Linda (all of whom have an intense love of music too).
RELATED ARTICLES
album reviewalbum reviewsdennis deyoung
9.0