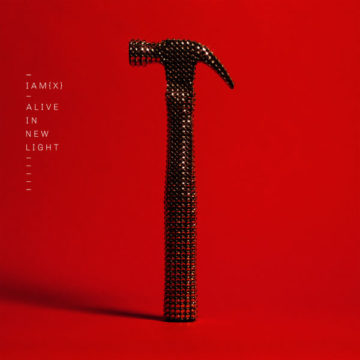 IAMX is really Chris Corner, formerly of Sneaker Pimps. He has been recording and performing under the name IAMX since 2004 and Alive In New Light is IAMX’s eighth studio album. This is also being hailed as his first ‘happy album’, or at least the first album he has released since he has treated his severe, long standing depression. Although it is ‘happy’, it is still a deep look at the struggles one goes through when suffering depression, and Corner is able to do this with his use of instruments, programming, vocals and lyrics. It is not only a stunning album, but a brave and brilliant statement.

Although Corner is really a one man band, writing, recording, playing and producing all the tracks, he had some help from tattoo artist and musician, Kat Von D. This infuses some new energy and allows Corner to branch out and bring in different sounds and voices throughout the nine track album.

Corner kicks off Alive In New Light with “Stardust”. It opens with a sparse arrangement, with the opening lyrics, “I’ve got this funny feeling that I can’t shake, The devil’s in the wires, data eating up my brain.” Here he is more machine than human, and in being such, cuts himself off from the world. It is a declaration of where he is starting on this record. The following songs, brings him back to the human world, faults and all, and allows him to not only heal but also get through the pain and accept that he might need some help.

This comes to conclusion in the last track, “The Power And The Glory”. Here he concludes the album with the line “I am waiting for your guilding light to bring me back.” As with the first track, it begins with a sparse arrangement. But here, it is a piano, a more human sounding instrument. It helps to illustrate that the album is a journey. He takes this journey, initially,  with heavy machine like electronics, but by the end of the album they even sound more human “The Power And The Glory” features a beautiful piano and Corner’s honest voice.

He has managed to, on one album, to describe the feeling of depression and the personal fights and battles to get ‘healthy’. It is an honest album full of incredible melodies (touched with melancholy) and some of the best vocal arrangements heard on record this year. His vocal range is staggering and he uses it to full effect.

This is a brilliant album, one that should be enjoyed in one sitting. It is a brave album made by a very honest artist. Corner touches the soul with Alive In New Light.  Although it is electronica, his vocal arrangements and his voice make it more real. He constructs beautiful melodies and keps the listener engaged throughout the entire album.

The title is a clue to the content of the record and a beautiful tip of the hat to, not only recovering, but being alive to enjoy it.

Strong contender for album of the year. Yes I know it is early in the year, but this is a work of art.

Born and raised in Whitby, Aaron discovered music through his love of The Beatles. This led to a career in radio, writing for various publications, and ultimately a radio show about The Beatles (Beatles Universe), which ran for over four years. When not immersed in music, Aaron enjoys spending time with the loves of his life -- his wife Andrea, and daughters Emily and Linda (all of whom have an intense love of music too).
RELATED ARTICLES
album reviewsalive in new lightcaroline
8.0