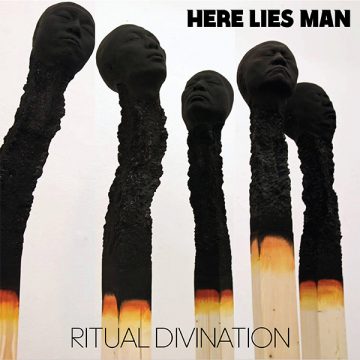 Having burst onto the scene in 2017 with their self-titled debut record, LA’s Here Lies Man has only continued to dive deeper into its essential question, ‘What if Black Sabbath played Afrobeat?’. The combination of sleazy, hard-hitting riffs paired with a fluid groove will leave you astounded, making their latest release, Ritual Divination – their first since 2019’s No Ground To Walk Upon – further explore this musical territory that has become unmistakably distinctive to Here Lies Man.

Ritual Divination opens with the sauntering shuffle that lurks as if it was pulled straight from 1974, only being driven by the crunching and distorted guitar that very well could have been played by the hand of doom belonging to Tony Iommi. The only thing modern about the five-min epic and constantly shifting “In These Dreams” are the ambient vocals layered beneath a rich bed of instrumentals. Ritual Divination roll, “I Told You (You Shall Die)” adds a modern alternative tone into the mix while digging deeper into their Afrobeat influences.

Over the course of its hour long run time and 15 tracks – a bold and drastic increase from any of their previous releases – Here Lies Man continues to explore a soundscape that feels largely uncharted. As a result, Ritual Divination is full of highlights. The powerful and rhythmic crunch of “Run Away Children” is both light and unrelentingly heavy, while “I Wander” immediately follows with an undeniable funky swagger that brings together guitar lead lines inspired by Jimmy Page, with a beat and backing vocals reminiscent of Rare Earth. In fact, much like Page’s dealing with the occult and Iommi’s supposed satanic connections, there is an intriguing sense of darkness to Ritual Divination that is both unsettling and compelling, that can be heard from front to back. Songs like the up-tempo “Come Inside”, the sludgy “What You See”, the riff-heavy “Collector Of Vanities”, the Latin-inspired “You Would Not See From Heaven” and the tight breakbeat of “Cutting Through The Tether” further foster this darkness while also pushing the album to all new highs.

Here Lies Man is a band that, without doubt, should be leaders of the underground rock counterculture. Simply put, there are no other artists doing anything remotely close to what they continue to achieve record after record as they diver deeper and deeper into an untapped well of brilliant sonic creativity. This is stoner rock for a new generation; Sabbath for the funky; an acid trip for the ears. As I listen to Ritual Divination at an obnoxious volume, I am overcome with a wave of sound that feels familiar, and yet entirely new. Ultimately, Ritual Divination is perhaps Here Lies Man’s greatest and most introspective musical experience to date.

A passion for music has always been a part of Gerrod’s life. As a young boy, he was raised on a steady diet of the music from The Chili Peppers, Aerosmith, The Stones, Prince, and others from his mum. Raised in the GTA, Gerrod continued to foster his love for music by attending a wide range of concerts and learning the drums. His unapologetic passion for music has no bounds and has spread to a wide variety of styles, whether it be the 90’s rock that sound tracked his teenage years, the jazz he studied in university, or his newfound love for hip-hop. He recently received his bachelors in music and education from York University and is passionate about writing and reviewing good (and less than good) music. Gerrod is also the drummer and songwriter for a Toronto based rock & roll band, One In The Chamber.
RELATED ARTICLES
album reviewalbum reviewshere lies man
6.0