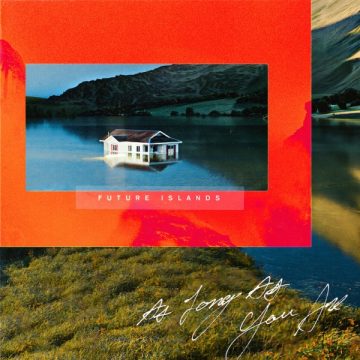 Future Islands
As Long As You Are
4AD

Nearly three years after releasing The Far Field (2017) and six years after their breakout album Singles (2014), Future Islands have returned with another beautiful new wave synth-pop album called As Long As You Are (2020). While their career as a band took its biggest leap into prominence with an incredible performance on David Letterman of “Seasons (Waiting On You)” from their stunning Singles album, this latest offering shows how they’ve continued to deepen and hone their distinctive sound. Lead singer Sam Herring—one of the best frontmen in music at the moment—continues to write crushingly poetic songs about the past, letting it go, and looking to the future with a renewed hope, and this latest release reveals a band at the height of their collective powers.

The opening track “Glada” begins with the sound of seagulls. Then, the slow, harpy synths flood in, followed by the growling voice of Sam Herring who, with characteristic heartbreak, sings,

“Who am I?
Do I deserve the sea again
Slow lapping waves
Bathing my face in light?”,

questioning from the outset what he deserves in this life and why he should deserve anything at all. It seems possible to view the rest of the album as exploring the depths of that crisis.

The second track and early single, “For Sure”, is reminiscent of the sound that vaulted them to fame when Singles came out, a thumping, fast-paced track, anchored by Herring’s unique delivery, insisting to the invisible other that he won’t be the one to get in anyone’s way. “Born In A War” follows, bouncy in its sound with rising melodies and bright synths washing through the background, and it’s possible, with the richness of the music, to miss just how romantic and poetic Sam Herring’s lyrics are, how crushing or fleeting he is able to make what would be normal moments to the rest of us.

While much of the album contains the sort of thumping New wave of Future Islands most popular songs, there is a whole side to them (and to Herring) that gets less attention than it deserves; a tender, nostalgic, sorrowful side that expresses itself through a more reflective, slower pace in a song like “I Knew You” and “City’s Face” where he sings “It’s so strange how a person can change a city’s face,” in one of the most reflective songs on the album, a song indicative of impending change to its speaker’s life, the recognition of time gone by, but like all great albums, its construction and craft goes beyond its individual songs and extends to the entire collection of tracks. Slower, more reflective tracks are balanced out by faster-paced dance tracks, and as listeners, we run the gamut of emotions right alongside Herring as he gives agonizing expression to the complexities of human life’s many phases.

Overall, this is a brilliant album, a triumph of lyricism and sound from one of the most distinctive bands in the world today, an album in which every song achieves poignancy. Like their past work, at some point you realize just how personal all of this is to him—what an artist he is—every song imbued with passion and honesty that is often heart-rending and tender at the same time that it’s pulling you up out of your chair to dance.

Anyone who can do that deserves everything they can get.

Dan Kennard is an English teacher and fiction writer living outside Kansas City, Kansas where he lives with his wife and children. More about his work can be found at amazon.com/author/dankennard. You can also follow him on Twitter and Instagram @kennardistry or contact him at [email protected]
RELATED ARTICLES
4adalbum reviewalbum reviews

by Ryan Sagadore on August 21, 2020
The Lemon Twigs Songs For The General Public 4AD Returning after their previous release, ambitious rock opera Go to School, Long Island brothers Michael and Brian D’Addario get back to the basics with more straight-ahead pop songs. Songs for the [...]
6.0

by Richard Gerritsen on November 8, 2019
Gene Clark No Other (Deluxe Boxset) 4AD 4AD has remastered late American singer/songwriter Gene Clark’s 1974 solo album No Other. But the question is, did they really need to? Every instrument originally used can be heard on the remastered [...]