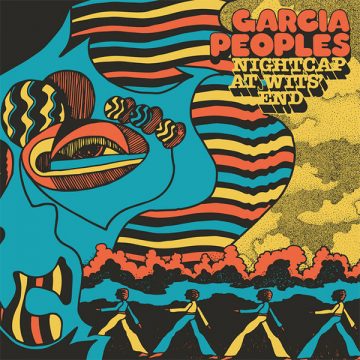 Garcia Peoples
Nightcap At Wits’ End
Beyond Beyond Is Beyond

Have you been hiding all those faves you have from the psych/prog era, particularly those that have folkish tendencies and vocal harmonies that do not overtly show off their instrumental prowess, but focus on playing some fascinating music? You can now place them on the top of your playing pile, along with Nightcap at Wits’ End, the spanking new album from New York’s Garcia Peoples.

These four guys are obviously proud of their music collection, that includes everything from early Jethro Tull to Caravan, as well as Dire Straits and Grizzly Bear from the newer purveyors of a sound that favours intricate music changes without overpowering the listener with, as Salieri’s character would say in Milos Forman’s Amadeus, too many notes.

With Nightcap at Wits’ End, Garcia Peoples are able to resurrect all that was good that psychedelia was transforming into progressive rock, leaving all the excesses of the genre behind them. At the same time, they did not get stuck in an infinite time warp but were able to adjust and adapt that sound for more modern times and ears. They were able to achieve a mean feat for current musical trends, come up with music that evolves and uncovers something new with every listen.