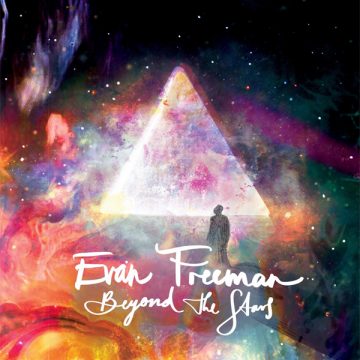 Following his 2016 debut album Luna, Evan Freeman is back with another sonic float-about, Beyond the Stars, a 13-track collection broken into three parts of intricately crafted shoegaze that is rich and vast and ethereal, and while its sound is ghostly and somber at times, it is out-weighed overall by the sunrise-esque feeling of starting anew that colours much of the album.

At over an hour in length, Beyond the Stars presents itself as something to sit down and pay attention to, and by the end it even seems possible to discern a narrative of sorts as well. Part I opens with “Shimmer”, a swirling, spacey track in which you feel like you’ve been flung upward from one world into another, jarred from your previous life, a theme that continues into the next track, “Amnesia” in which the speaker seems to take a detached, confused stroll through a world he no longer recognizes. “Hold On” introduces a thrumming bassline into the mix for the first time and turns into a big, driving song by the end, followed by “A Bright Tomorrow” a dreamy, acoustic-driven piece where Freeman’s hazy vocals carry us gently along.

In Part II, there is a shift towards a darker tone, and opener “Blue Key” is one of a handful of instrumental or nearly instrumental tracks on the album. “Alien in a Glass Case” is more electronic sounding than the previous tracks and the sound — not to mention the title — are reminiscent of certain Radiohead songs. “Ghostly Melody” is a smooth, bass-driven piece with clacking, horse-trot percussion, beautiful orchestral strings, and Freeman’s hazy voice holding it all together in what was my favorite track of the album.

Part III opens with “Infinity”, the most spacious, soaring track, as if the more ominous atmosphere of Part II has been left behind for something brighter and richer in color. “Infinity” also contains one of the most delightful moments of the album as well when a piano — clear as day — omes in to dance over it all in a move that lifts the song into beautiful, celestial territory. It closes with “Creaks”, a graceful instrumental track that reinforces the album’s overall tone.

As it closes, even after a couple close listens, I know there is more here to get my head around and that Evan Freeman has crafted something rich and vast with this album that is well worth future listens. I also find — at times — that the richness can sometimes become too rich to fully enjoy. Parts II and III felt less busy than Part I, which was at times too intricate and shifty in its overall sound.

In the end, this is an album that uses its shoegaze sensibilities not to drown us in bleakness, but rather to continually raise us up so that we might continue to pull ourselves along in search of meaningful connections and suggests that opportunity for balance and authentic contentment is out there if we can find the courage to keep looking for it.