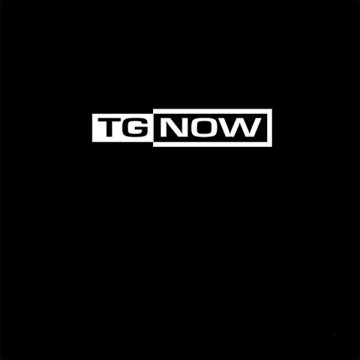 In 2004, Throbbing Gristle reformed after calling it a day in 1981. Their first order of business was to get together and record some music to see if this was still a viable band. The result was the EP TG Now, originally released in 2004 and only available to fans attending their RE-TG Astoria event in 2004, their first concert in many years.  As part of the ongoing of Throbbing Gristle reissues, Mute records has brought this very hard to find EP back to the general public.

TG Now kicks off with a relentless electronic instrumental to set the mood. “X-Ray” is a song that would not have sounded out of place in the early 1980s, but it  does a nice job of re-introducing the band. It is hypnotizing and lulls the listener into the world of  Throbbing Gristle. Before you can get to know it, the listener is thrust into the frightening territory of “Splitting Sky”. Over eleven minutes of a sound collage with some of P-Orridge’s most intimidating vocals.

This leads into “Almost Like This”, which sounds like Throbbing Gristle were under the  influence of Wire. It is not a copy but one can hear some similarities. The song starts off very melodic, before descending into an audio version of Hell, yet it all works because the sounds and layering of sounds is in the hands of Throbbing Gristle. The E.P. ends with “How Do You Deal”, the strongest track of the four. Here the band comes together, incorporate all of what they do best, and end the four-song E.P. with a bang.

TG Now was an experiment of sorts for the band, to see if the reformed Throbbing Gristle could still produce original, relevant music. The answer was a resounding yes, and the band must have thought so too as they went on to record two more albums during this reformation time period. TG Now sits comfortably in the Throbbing Gristle catalogue and a great deal of the credit must go to Mute for bringing it back again.

Born and raised in Whitby, Aaron discovered music through his love of The Beatles. This led to a career in radio, writing for various publications, and ultimately a radio show about The Beatles (Beatles Universe), which ran for over four years. When not immersed in music, Aaron enjoys spending time with the loves of his life -- his wife Andrea, and daughters Emily and Linda (all of whom have an intense love of music too).
RELATED ARTICLES
album reviewalbum reviewsmute records
8.0