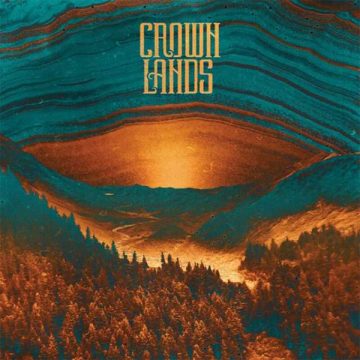 Crown Lands follows the release of “Spit It Out” and “Howlin’ Back”, two singles released earlier this year ahead of the album, and, most recently, “End Of The Road”.  The singles perfectly set the tone and raise the bar for what one should expect from Ontario’s biggest rock duo on their self-titled debut album. “Spit It Out” kicks off with a fuzz-laden riff and a rhythmic vocal melody, with a chorus that feels larger than life, while “Howlin’ Back” is an uptempo and driving track featuring a prominent slide guitar and soaring vocals. Demonstrating a glossy and classic indie rock vibe akin to The Tragically Hip and R.E.M., “End Of The Road” feels like a complete left turn as Crown Lands turn their attention to the ongoing crisis of missing and murdered Indigenous women in North America. While a departure from their riff-heavy, blues-inspired rock, “End Of The Road” adds a level of versatility to Crown Lands.

Beyond the singles, Crown Lands deliver a fantastic album that lives up to the excitement that has followed the band throughout the Canadian clubs and the tours they opened for the likes of Jack White and Primus. Tracks like “The River”, “Forest Song”, and the acoustic, folky ballad, “Sun Dance” especially, see Crown Lands dig deep into their Zeppelin influence with a flurry of psychedelic blues rock that is equally as nostalgic as it is fresh. On the other hand, “Leadfoot” leans closer to the likes of Queens Of The Stone Age and Wolfmother with a more modern and alternative flair. The contrast of the material and influences gives Crown Lands a chance to develop their songwriting abilities and performance to deliver a truly compelling record.

In many ways, Crown Lands is a long time coming. The triumphant full-length album from Canada’s most promising up and coming rock band exceeds all expectations and hype to deliver an album that should set the benchmark and tone for the coming decade for the new wave of classic rock sweeping across North America and Europe. Crown Lands is, without a doubt, among the greatest rock ‘n’ roll records of the year and will likely be remembered as a classic for its sheer ability to sound like it was unearthed from the ‘70s, while simultaneously dodging all clichés in a manner that feels reinvigorating to the genre as a whole.

A passion for music has always been a part of Gerrod’s life. As a young boy, he was raised on a steady diet of the music from The Chili Peppers, Aerosmith, The Stones, Prince, and others from his mum. Raised in the GTA, Gerrod continued to foster his love for music by attending a wide range of concerts and learning the drums. His unapologetic passion for music has no bounds and has spread to a wide variety of styles, whether it be the 90’s rock that sound tracked his teenage years, the jazz he studied in university, or his newfound love for hip-hop. He recently received his bachelors in music and education from York University and is passionate about writing and reviewing good (and less than good) music. Gerrod is also the drummer and songwriter for a Toronto based rock & roll band, One In The Chamber.
RELATED ARTICLES
album reviewalbum reviewscrown lands
9.0