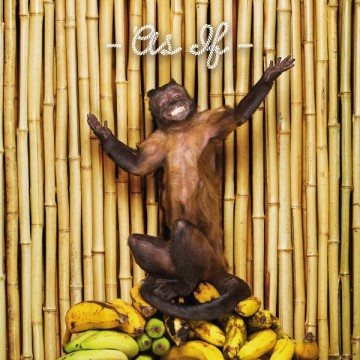 Dance punk is an impossible genre. It simply should not exist, much the same way a smoothie should not be made of meat, or a strawberry be barbecued. Yet here we are, and there they are, the delightful !!! or “Chk Chk Chk”, a band whose name has garnered more attention than their music, and whose music has full-throttled in a frenzied round-a-bout for so long that people either ignore them or pray that, after all these years, they will loop themselves by centrifugal momentum to some semblance of destination.

“Dance” music in its oversized-t-shirt looseness can label anything with a bumpin’ and a thumpin’ and a groove – but it’s also defined largely by impetus. It’s hard to get people dancing – and I mean dancing in the synchronized arm-leg contortion sense, not the up-down-up-down Mussolini fist-pump sense – without giving them, as NWA so succinctly put it “something 2 dance 2”.

Punk, by definition, is associated with subcultures – the dejected, the disenfranchised, the instinctual rapscallions. Dance, especially in contemporary context, is not. But maybe I’m ignoring the cordless connection; both punk and dance, ideology aside, rely on pillars of speed, energy and freedom as building materials. So, dance punk it is. And as perhaps the sole active ambassadors of this genre, !!! have provided us with a carnival of self-aware sound that ambles playfully across the king’s court, through the dining hall and onto the executioner’s block in no less than 11 tracks.

Opener “All U Writers” taunts, “get out your pencils and write” over syncopated vocal truncations and a dubbed-groove that occasionally falls to the back, letting out splintered lyrics about Beatles songs and smooching in Chevrolets. It closes pleasingly with a looped guitar sample and a revisiting of all previous elements, mixing them blissfully into a crockpot of bounce and slide. This is perfectly fine. A-Okay. Catchy, even. But there’s one nagging cold-sore, and my tongue kept feeling it all throughout As If. I hate to call it “value”, so maybe something less ambiguous: cohesion. Is this album supposed to be disposable 90s house-pop revivalism? And if so, why the half-assed attempts at urbanite cynicism on “Til The Money Runs Out” and “Bam City”. Going full-assed, or even no-assed, would’ve been more ambitious and admirable.

The inane thumping on “Sick Ass Moon” and farcical Stevie-Wonder imitation on “Freedom! ‘15” – which retains about 0.1% of the funk from the song its mimicking – begin to dispel any conjured excuses. The milk isn’t blue, but definitely soured, and this record is the litmus test to prove it. Packaged as a Lonely Island-esque piece of satire, As If begins to enter the realm of art. As it stands – or sits – vapidity is championed, as ever.

“Ooo” with its saccharine, check-catching hook and “I Feel So Free (Citation Needed)” with its hard-hitting stream-of-consciousness monologue are the album highlights. At one point during the latter’s 8 minutes, Nic Offer’ down-pitched voice jokingly booms “I feel like there’s just a shower of Grammys in here…I’m tripping on…splashing in puddles of Grammys”

The three trope-laden non-entities “Every Little Bit Counts” (which poorly imitates what “of Montreal” have been doing for decades), “All The Way” (second-rate, dubby exoticism), and “Funk (I Got This)” (100% polyester funk), make one seriously question the need for 11 songs when a 5 track EP would’ve surely sufficed.

The warm, head-bobbing sincerity of “Lucy Mongoosey” gives a glimpse of the kind of album !!! could’ve and perhaps should’ve made – emotionally resonant without trying to be the next big party anthem playlist.

As If is silly music for the kind of dilettante who enjoys having difficulty googling things, a visage of stunted growth for the elitist, and a dispassionate party album for the radio-headed yuppie whose expectations are so low to begin with that they probably find downtown apartment pricing reasonable.

Much can be said of !!!, but one fact will (at least for now) remain: Gang of Four and LCD Soundsystem they are not. No need to shoot the four horsemen a text; if As If is any indication of lifespan, dance punk is already asleep in its rocking chair.

I enjoy writing about music. I despise dancing about architecture.
RELATED ARTICLES
!!!album reviewsas if

by SPILL NEWS on February 24, 2022
!!! ANNOUNCES NINTH STUDIO ALBUM LET IT BE BLUE OUT MAY 6 VIA WARP RECORDS  SHARE ELECTRIFYING SINGLE/VISUALIZER “STORM AROUND THE [...]

by SPILL NEWS on November 19, 2015
(CHK CHK CHK) SHARE NEW VIDEO FROM “TOO MANY COOKS” DIRECTOR // ON US TOUR NOW !!! have just released their latest album As If featuring the already [...]