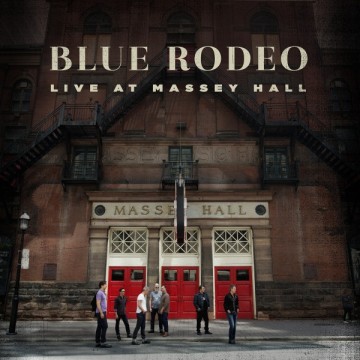 It is very good.

When Canadian giant Blue Rodeo releases a new album, there is never any worry when it comes to the quality of the music. It is always great. The unfortunate part about being such a prolific band is that it is difficult not to compare Live at Massey Hall to their other live releases, especially their 1999 hit Just Like a Vacation (Live). The comparison may be unfair but I think it is warranted.

Live at Massey Hall is comprised of 14 tracks. It contains five songs from their latest offering In Our Nature, the album they were promoting when they played the iconic Toronto venue on February 20 to a sold-out audience. It is also comprised of some of their best songs and full of rich instrumental interludes. The new seven-piece outfit that makes up the current Blue Rodeo lineup sounds very strong. The evening itself was special, as Jim Cuddy’s son Devin joined them playing. I can only imagine the joy this must have brought to his dad.

It is very good, but why isn’t it great?

This may seem a bit petty and insignificant, but it is a strange decision to fade each song. What is most enjoyable about any live recording is that it offers someone who wasn’t at the concert, an opportunity to experience that ‘moment.’ The fade out after each track simply breaks the magic. It is like watching an actor break character during a theatre performance.

I am also sad that this wasn’t a double album. Only 14 of the 27 tracks performed that evening made the final cut. Yes, there is a tremendous cost in including them all, but I have the task of focusing on the artistic value, not the financial viability or success. We are missing out on the Rolling Stone cover “The Last Five”, “After the Rain”, “Dark Angel”, “Try”, and the encore performance of “What Am I Doing Here.”

It has been 16 years since the release of Just like a Vacation (Live). It happens to be one of my favourite albums. I guess I have a personal connection to those songs, because in 1999, I played them over and over again. It was a long time before the CD left the car and returned to its case. I watched my first performance of Blue Rodeo at Fort York that year and I was hooked. I bought the album after the show and never looked back.

What makes Blue Rodeo such a great band is its melodies, and the connection to our Canadian landscape. They are genuine, talented, and some of the most down-to-earth human beings in the business. What Live at Massey Hall is missing is that in-between banter and laughs which is so prevalent on Just Like a Vacation (Live).

If you have never heard the great story Greg Keelor tells before the band plays “Florida,” please do yourself a favour and get a hold of a copy soon. It is right up there with Gord Downie’s whale story. If you haven’t heard that one either, I can’t help you.

The bottom line: it is very good.

Grzegorz Kieszkowski originally hails from Bydgoszcz, Poland. After his father was released from prison in 1984, for his involvement with the Solidarity movement, Greg and his family escaped to Canada in 1985. He makes Cobourg his home, along with his wife and two small children. Greg is a graduate of York University, with a double major in English and Philosophy. Music has always been in his blood, and although his tastes have matured, he will always have a soft spot for the Metal days of the late 1980’s. He is a full time English teacher and a professional photographer. Part of the allure of writing is the possibility of conversation, and he would love to hear your comments and opinions. Please feel free to visit his personal website - grzegorzkieszkowski.com.
RELATED ARTICLES
album reviewsblue rodeowarner music canada
8.0