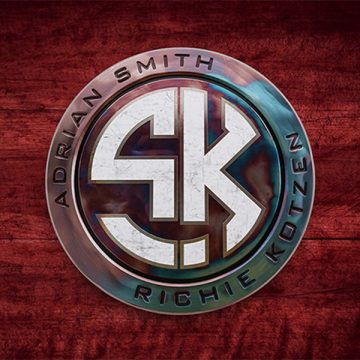 Richie Kotzen is no stranger to trying out different things so this album should come as no surprise. Same goes for Adrian Smith, and together they form a perfect union with the posthumous release of Smith/Kotzen.

The listener’s guessing game of who is playing what gets easier than the days of Iron Maiden. The videos for “Scars” and “Taking My Chances” offer the typical shots, allowing us to see who is taking the solo. If you have trouble keeping the guitars separated, it is likely because the technique and style of the two do cross over, and in doing so bring purpose to a worthy project.

The songs are the focus ahead of the guitar flash and demonstrate a lineage from the ‘70s going into the new millennium. “Solar Fire” has a southern flavour for foot tappin’ that a new country artist could get away with, but it would be no match with Adrian Smith’s mate, Nicko McBrain from Iron Maiden, playing the drums. The verses on “Til Tomorrow” have him taking some obvious cues of Chris Cornell’s voice on the chorus. The song also has me thinking that if Guns N’ Roses with Slash could put out new music tomorrow, it may stand a chance of sounding as good as “Til Tomorrow”.

Blues ideals are up front here, and groove is in the pocket. The guitar solos have a mapped-out texture heard on “Running”. The last few of minutes of “You Don’t Know Me” have a changing tempo with solos ripping under a dark melodic chord arrangement, taking one back to the days of Gary Moore. The lyrics across the record all have the day-to-day drama of relationships, blending with the current political climate. The production sometimes goes close to the edge, but for the most part does not take many chances. The songs stand close together in a world where new record releases are more prevalent for unification. I do fathom a notion that Smith/Kozten will play live in concert someday soon, and perform the songs closer to us, and closer together.

by SPILL NEW MUSIC on July 15, 2021
IRON MAIDEN ENDS WEEKS OF ONLINE SPECULATION TO REVEAL FIRST NEW MUSIC IN 6 YEARS “THE WRITING ON THE WALL” [...]