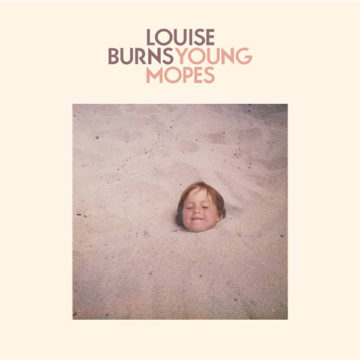 Louise Burns is a 30 year-old singer/songwriter, and she has been a professional musician for 20 years. At age the incredibly young age of 11, she made her debut with the band Lillix. Over the last 20 years, she has grown up in the public eye, which is not an easy task at all. It seems that some of those frustrations are expressed throughout this album. Her latest album is called Young Mopes. Great, ironic, and a funny title; it set my expectations high. I had already heard the single “Storms” on the CBC and could not help but think that song was tailor-made for radio, especially the CBC. The slight reverb on the vocals, the dance beat, catchy melody; again, expectations were high.

However, upon listening to the entire album, it did not live up to my expectations. The songs are expertly produced and played (featuring Danny Hancock and Ryan Peters, from the band Ladyhawk), and Burns’ vocals are strong and fit perfectly with the music. The problem with the album is that it does not hold together as an album. It is more of a collection of songs put together, all of which could find a home on indie radio. But that does create a cohesive sound and a strong listening experience. This is an album that could just as easily be on shuffle, rather than listened to all the way through. Maybe that is the point, and maybe that is her goal, which is fine and thus meets that mark. With most compilations, some songs are stronger than others (the album kicks off in high style with the brilliant “Who’s The Madman”), but this one does not maintain that level of quality.

Louise is a talented writer, but her wordplay does not come to the surface often. “Young Mopes” is an example of her ability to write strong lyrics, and musically it is probably the most interesting song on the album, channeling 1960’s and 1980’s vibes at the same time, but again she does not maintain this throughout. The closing song, “Downtown Lights”, sounds like a Stevie Nicks outtake.

This is the frustrating aspect of the album; moments of brilliance are not consistent. The music has waves of the last three decades flowing throughout and she wears her influences on her sleeve (Stevie Nicks, Siouxise, Madonna). She can produce a fantastic album (as evidenced in her previous solo outings), but this album feels more geared to a market rather than being her own voice. It is not a bad album; it’s just not great.

Born and raised in Whitby, Aaron discovered music through his love of The Beatles. This led to a career in radio, writing for various publications, and ultimately a radio show about The Beatles (Beatles Universe), which ran for over four years. When not immersed in music, Aaron enjoys spending time with the loves of his life -- his wife Andrea, and daughters Emily and Linda (all of whom have an intense love of music too).
RELATED ARTICLES
album reviewslight organ records
8.0