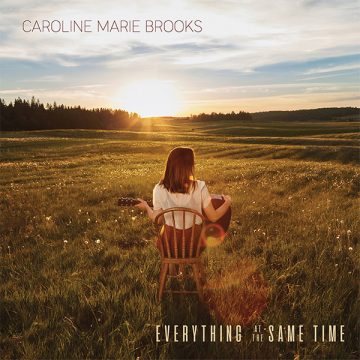 Caroline Marie Brooks
Everything At The Same Time
Outside Music

It is always great to hear an artist who grew up in my home town of Whitby, which is where Caroline Marie Brooks spent her early years and got her start performing with her family as “The Brooks Sisters”. In fact her family plays on this album, a musical reunion of sorts.  And since 2006, she has been a member of The Good Lovelies. The album, Everything At The Same Time, is exactly what one would expect from this folk artist. Thoughtful, beautiful, well arranged acoustic based snippets of life. It is a brilliant album.

Jim Bryson and Brooks produced this album and they have done a fantastic job in presenting the music. Brooks’s voice is front and centre, and the accompanying music is perfect. Sparse, and layered. “I Can’t Always Be There”, for example, benefits from layered sounds mixed in with the perfect guitar. When all of this is combined with Brooks’s emotional vocals, one hears a heartbreaking and emotional work of art.

Brooks is not trying to reinvent folk music, but what she does do is create her own style in that genre. She is not afraid to experiment just enough to make the songs interesting and keeps them inviting and accessible.  While she does not stray too far from the folk base, she still carves out her own sound. The instrumental, “Song For Fred”, who is her father, comes out of the blue and without a word she conveys a great deal of sentiment into the song. It is short, but powerful.

Bryson and Brooks have assembled several strong players to bring the songs to life. On “Birdsong”, for example, Andrew O’Brien (The Fortunate Ones) provides stirring vocals and with Brooks, this vocal arrangement  lifts the song to a whole different level. Fellow Good Lovelies (Kerri Ough and Sue Passmore) lend their support and talent as well. Again, along with Brooks fantastic guitar, one is treated to incredible lap steel playing (Christine Bougie), upright bass (Steve Zsirai, and Ben Whiteley) and drums/percussion (Joshua Van Tassel). These are just a few of the very talented artists who contribute to the album.

Lyrically, the album is very honest and seemingly very personal. She writes about her own family, relationships, growing older, her own insecurities and, well, life in general. Although the lyrics are personal, she invites the listener in to be part of her world. Brooks wrote all the songs except “Lights Go Down” which Peter Katz co-wrote and her faithful cover of Roger Miller’s “Oo-De-Lally” from Disney’s Robin Hood. Capping the album off with the cover is the perfect way to end the album.

Everything At The Same Time is a true solo effort from Brooks. While there are similarities to The Good Lovelies, it is clearly her own sound and vision. With this album, she steps away from the band and makes her own distinct mark. It is full of melodic ad substantial songs. And like all great works, it is an album that one will want to spin again and again.

Born and raised in Whitby, Aaron discovered music through his love of The Beatles. This led to a career in radio, writing for various publications, and ultimately a radio show about The Beatles (Beatles Universe), which ran for over four years. When not immersed in music, Aaron enjoys spending time with the loves of his life -- his wife Andrea, and daughters Emily and Linda (all of whom have an intense love of music too).
RELATED ARTICLES
album reviewalbum reviewscaroline marie brooks
8.0