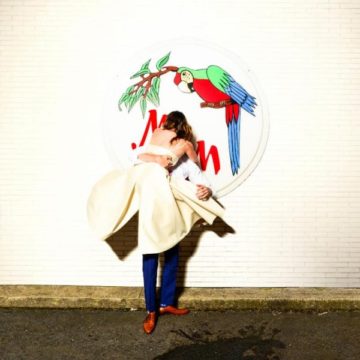 It has only been a few short years since Sylvan Esso released their self-titled debut to an exceptionally warm response. The harmonious melding of Amelia Randall Meath’s ethereal vocals and Nick Sanborn’s rhythmic beats was difficult to ignore as songs like “Hey Mami,” “H.S.K.T.,” and ”Coffee” captured both airwaves and attention.

With their follow-up, What Now, Sylvan Esso maintains their minimalist lineup, yet manage to expand their sound with increasingly experimental pop soundscapes. What Now presents a noticeably more mature and cynical version of Sylvan Esso. “Sound,” the opening track, is quite a hazy and pensive piece that is vibrantly textured with glitches and samples. This artfully constructed introduction braces you for a new view of Sylvan Esso.

Within songs like “Radio” and “Just Dancing” are choruses that are irresistibly catchy. Sanborn’s beat-heavy backing to Meath’s soaring vocals is unquestionably radio friendly and takes full advantage of modern pop audio styling. The lyrics on “Radio” are quite critical of individuals becoming a “slave to the radio,” creating a song that is both poignant and catchy.

Near the end of the album is the delightfully intimate and minimalist track “Slack Jaw” which is a beautiful demonstration of the amount that can be accomplished while keeping a song simple. Without Sanborn’s typically buoyant backing, Meath’s vocals take centre stage and become hauntingly personal. With a subtle electronic piano and gentle vocals, “Slack Jaw” is undeniably the quietest song on the album and gives a slight taste of Meath’s traditional folk roots.

The final track, “Rewind” is initially quite reminiscent of 2014’s Sylvan Esso as it utilises familiar sounds and textures that intertwine with acoustic guitar and harmonised vocals to round out a successful sophomore album. What Now is a vibrant alternative pop album that demonstrates Sylvan Esso’s ability to balance thoughtful experimentation, danceable rhythms, and catchy hooks.

I am an Edmonton based musicophile and photographer who loves experiencing music whether it's live or on my turntable. I play seven instruments and go to a lot of concerts.
RELATED ARTICLES
album reviewsradio
8.0