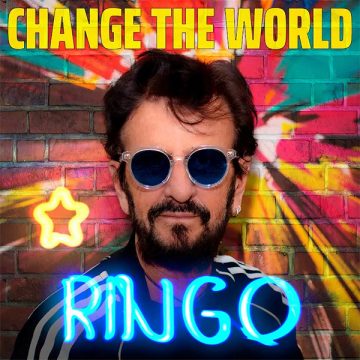 Ringo Starr is back! Six months since his first official EP, here he is with another one, Change The World. Once again, Starr is working with his famous friends, and he knocks it out of the park.

Change The World opens with the title track. With a tip of the hat to the Beatles, he pays homage to “Rain” written by Toto’s Steve Lukather and Joseph Williams, is tailored made for Starr, lyrically and musically. It also features some very fine vocals from Amy Keys, Zelma Davis, Billy Valentine, and Darryl Phinnessee. It is a rocking, rhythm and blues song with stirring horn arrangements, and it is a brilliant way to open the set.

This is followed by another reggae-tinged song written by Starr and longtime producer/collaborator Bruce Sugar. “Just The Way” is a very pleasant song, with strong vocals and drumming from Starr and the song benefits from guitar player Tony Chen. “Come Undone”,  is co-written with Linda of4 Non Blondes. A country-influenced song, about coping with life’s complexities, with a very catchy melody. Before it gets too far into the country genre, Trombone Shorty appears with New Orleans-flavoured trombone, and it is inspirational.

The EP comes to a close with a rousing cover of “Rock Around The Clock”, featuring Joe Walsh on guitar, who is nothing short of astounding. Nathan East brings his rhythm and blues style bass to the party and the end result is an absolute blast. Amy Keys and Windy Wagner provide strong backing vocals. A fantastic cover, and dare I say it, Starr makes this classic rock ‘n’ roll song his own.

Starr continues to have strong peaceful messages in his music but he also likes to have fun. The good spirit is felt here, as all the musicians sound like they are having a great deal of fun. It could be that Starr believes that one can Change The World, especially with music. And, who knows, maybe he can. Certainly producing himself with the help of Bruce Sugar, he has full control of how he wants his music to be presented. It may be a bit formulaic, but who cares? In the past few years Starr has consistently recorded and released incredible albums and his voice and drumming has never sounded better.

Born and raised in Whitby, Aaron discovered music through his love of The Beatles. This led to a career in radio, writing for various publications, and ultimately a radio show about The Beatles (Beatles Universe), which ran for over four years. When not immersed in music, Aaron enjoys spending time with the loves of his life -- his wife Andrea, and daughters Emily and Linda (all of whom have an intense love of music too).
RELATED ARTICLES
album reviewalbum reviewsringo starr
8.0