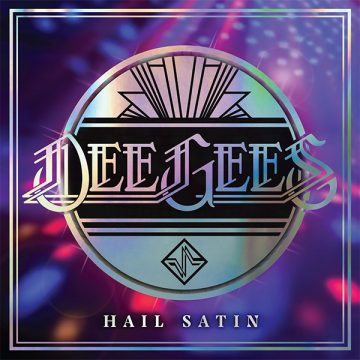 Dave Grohl and the Foo Fighters have truly reached a point where they can do no wrong – so much so, that such a sentiment feels redundant. Their latest Record Store Day release, Hail Satin sees the rock legends take a nod from Zakk Wylde’s Black Sabbath tribute, Zakk Sabbath, and pay homage to disco icons, The Bee Gees, as the Dee Gees (get it? Dave Grohl? D.G.? The Dee Gees). The exclusive LP has since been released digitally and is half Bee Gee’s cover album and half Foo Fighters live record performed in studio in celebration of Medicine At Midnight, released earlier this year.

The first half of Hail Satin sees the band perform five Bee Gees tracks, including some of their biggest of hits – “You Should Be Dancing”, “Night Fever”, and “More Than A Woman” – alongside two deep cuts – “Tragedy” and “Shadow Dancing”. The absence of “Stayin’ Alive” is curious; however the choice to include lesser known works denotes Grohl’s love for the quintessential disco group. Upon first listen of the opening track and lead single, “You Should Be Dancing”, Hail Satin will immediately strike you as weird, but that seems to be the point. Grohl is intentionally pushing the boundaries as a rock and roll spokesperson by indulging in his love for disco (there are cultural layers to the significance of a rockstar doing this, much of which has to do with the homophobia and misogyny that surrounded rock and was targeted at disco in the late ‘70s and early ‘80s, all of which I’m sure Grohl was aware of, making this far more powerful of a performance). I can speak of the band’s use of synths and distorted guitars or how they groove together like a seasoned dance rock band, but all of that feels secondary to the amount of fun that is exploding from this recording. Grohl is having the time of his life imitating Andy Gibb and if you aren’t having an absolute blast while listening to Hail Satin, then you need to call a doctor because you’re dying inside.

The second half of the record captures a live performance from the band at 606 Studios. Having only been able to play one show, a triumphant return of live music at Madison Square Garden, this year, this live set consists of five tracks, all from their latest studio album, Medicine At Midnight. It goes without saying that the band sounds incredible – Taylor Hawkins drum tone is particularly fat and punchy while Grohl’s vocals leave it all on the line – and are in fine touring shape. They sound hungry for the stage as they blast through the hard hitting “Making A Fire”, the ballad that erupts into a full on rocker, “Waiting On A War”, and the funky “Cloudspotter”. The hard rock sound of the band is only enhanced by the recent addition of the lush backing vocals which add to the pop rock flavour of the album. Of the five live cuts, “Shame Shame” is the definite highlight as the Foo Fighters bring one of their most experimental alternative rock tracks to life in superb fashion. This feels like only a teaser of what’s to come from the Foo Fighters when they can take to world by storm once again, one arena at a time.

The live half of Hail Satin feels like a bonus to a special moment in time. While the album as a whole is fantastic, the real magic to Hail Satin is in the Bee Gees tribute, so much so, that a full Bee Gees cover album would be the only way that Grohl and company could have topped what they did. Hail Satin is truly a unique record that is unlike anything else you’d expect from a hard rock band. Rather than take themselves too seriously, Foo Fighters have experiments and pushed the musical and cultural boundaries to their limits and have returned with absolute lightning in a bottle. All hail the Foo Fighters and the eternal sound of the Bee Gees!

A passion for music has always been a part of Gerrod’s life. As a young boy, he was raised on a steady diet of the music from The Chili Peppers, Aerosmith, The Stones, Prince, and others from his mum. Raised in the GTA, Gerrod continued to foster his love for music by attending a wide range of concerts and learning the drums. His unapologetic passion for music has no bounds and has spread to a wide variety of styles, whether it be the 90’s rock that sound tracked his teenage years, the jazz he studied in university, or his newfound love for hip-hop. He recently received his bachelors in music and education from York University and is passionate about writing and reviewing good (and less than good) music. Gerrod is also the drummer and songwriter for a Toronto based rock & roll band, One In The Chamber.
RELATED ARTICLES
album reviewalbum reviewsdave grohl
8.0