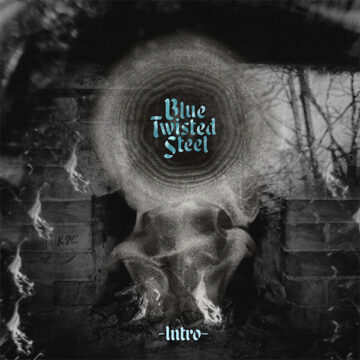 Charleston, WV’s Blue Twisted Steel has just released Intro and it is something special. Imagine (if you will) a recording that is part blues-funk, part singer-songwriter, and all original, and you would be getting close to the sound produced by Blue Twisted Steel.

In this six-song EP, core band members Josiah Spangler, Abigail Spangler, and Evan Olds cover a lot of ground. The project is book-ended by a pair of instrumentals, “Intro” and “Outro”, which are essentially two sides of the same coin. In between the instrumentals is a near-perfect collection of songs.

With its warm acoustic sound, the nouveau folk “Tar And Feather” is one of the EP’s highlights. As heirs apparent to acts like Simon and Garfunkel, or Peter Bjorn & John, the Spanglers’ harmonies are a perfect fit. Honest and beautiful, this song builds wonderfully, ending in a play-out which features bowed bass, shimmering guitar, and far-away harmonies. Conversely, the bluesy rock of  “The Carpenter” drives hauntingly, with its spacey instrumental bridge, and a drum part that would make Steve Gadd proud.

The only down-side is that it is not long enough. Am I gushing here? I could go on, but I will not. You need to hear this music.

Musician, writer, and grandad Bryan Williston is a fan of music in all of its forms. He loves to listen to, play, and talk about music, and to share his ideas with others. Despite the failings of humans, he is hopeful about the future, and thinks that Spill Magazine readers are just the best. Bryan lives in Whitby with an assortment of people and dogs.
RELATED ARTICLES
album reviewalbum reviews
8.0