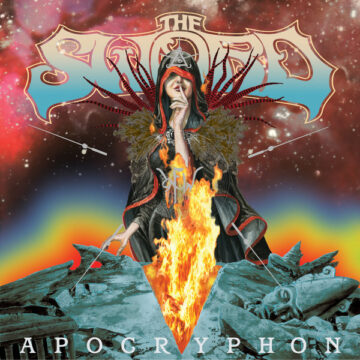 Bands like The Sword have always confidently found themselves at the forefront of retro-metal. Colouring and successfully merging classic doom metal, 70’s psychedelic nostalgia, and stoner rock aesthetics into each of their experiences, The Sword has always found a way to stay true to its sound while embracing ways to move forward. 2008’s bombastic and powerful Gods of Earth and 2010’s rich and dynamic concept album Warp Riders proved that The Sword was on a path to something greater. By 2012, the band was already reaching greater heights with Apocryphon.

An album and 10th anniversary edition that can only be described as an album of change and growth for the retro-metal luminaries, Apocryphon grew into a deeper nostalgic rock soundscape while bleeding into others to make it a more pronounced sound. This was also an album that first introduced no instrumental tracks for the band. While this is a stylistic departure for The Sword, the energy with which they thrive is still deeply rooted from their previous endeavors and is rewarding to hear from start to finish.

From the beginning of the 10th-anniversary vinyl edition, the first track, “The Veil Of Isis” embraces beautifully mesmerizing heavy metal soundscapes with arena-sized sound. Other moments such as “Arcane Mountain,” are massive yet continue to show off their technical instrumental magic, dedication to throwback classical riffs, and creatively bizarre concepts within their craft.

“Hawks and Serpents” is the definition of 80s heavy metal glam rock and is one of the most immersive tracks on the record. Continuing to show their aptitude for creating stories on the metaphysical, “Hawks and Serpents” blends the two worlds, manifesting a beautifully defined sci-fi presence and captivating instrumental venture.

Finale “Apocryphon” encapsulates everything The Sword had cultivated from past efforts and draws it into one infectious last experience. Seeping into the listener’s atmospheric senses and transporting you somewhere else entirely, The Sword has done its job in manifesting a world that is both visionary and intriguing down to the very last song.

Looking back on Apocryphon, The Sword has made a detailed concept record that hones in not just on all the innovative things you can do within the doom metal genre, but the motifs they focused on within the album’s narrative such as life, death, and rebirth, are what truly makes this album shine within the band’s discography. While this was an album of firsts for the Texas quartet, it proved to be much more for their careers in the end.