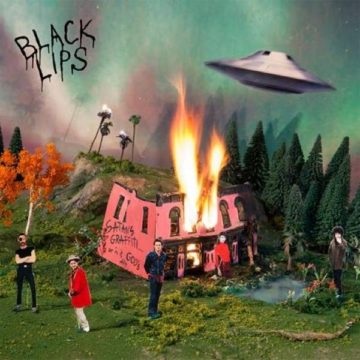 Atlanta based punk outfit, the Black Lips, have released their first album since 2014’s Underneath The Rainbow. Recorded throughout 2016 at a studio in upstate New York, Satan’s Graffiti Or God’s Art was produced and recorded by Sean Lennon (yes, John and Yoko’s son), and captures a collision between a retro punk vibe with a style of song writing that is reminiscent of classic artists from the 1960’s. It is very rare that these two distinct styles cross paths. Would the Stones fit with the Stooges? Probably not, and it is even more rare to hear it work, as the Clash did. Ultimately, however, it is the genre twisting nature of the Black Lips that makes Satan’s Graffiti Or God’s Art so damn enjoyable.

The album starts off quietly with a crescendo that closely resembles lounge music, and with a haunting twist grows louder, hinting at a refrain that comes back from time to time, nicely tying the album together. The album truly kicks into high gear with “Occidental Front”, a song which sounds as if it should be the soundtrack to a modern cowboy chase scene set in a post-apocalyptic desert, as in Mad Max (2015). The veracious punk was very present and tasteful across the album. Rather than fall to the simple formula most modern punk bands look to as their first and only resort of the chugging of near constant eighth notes of distorted power chords, Black Lips look to Iggy Pop and Joe Strummer for inspiration as to how to make their brand of punk artistic and far more interesting than their peers. This can be heard on the straggly blues track, “Got Me All Alone”, a song that sounds as if at any moment, the song will fall apart into the very disparity that haunts the lead vocalist. This creative nature of writing punk songs can be heard across the entire album, but stands out most on “Can’t Hold On”, “Squatting In Heaven”, and “Lucid Nightmare”.

As I mentioned, there is a strong 1960’s classic rock influence on Satan’s Graffiti Or God’s Art, and dare I even compare these tracks to the simplistic, yet brilliant, styling of The Beatles. Perhaps it’s Sean Lennon’s involvement, or it is all from the Black Lips, but songs like “The Last Cul De Sac”, “Crystal Night”, and the acoustic “Loser’s Lament” capture just that. Not only do these songs give the album a nice change of pace, but they also demonstrate just how versatile the Black Lips can be; something that is often absent from much of today’s popular music.

Satan’s Graffiti Or God’s Art is a very welcomed blast from the past when it comes to punk rock. It is a rare occurrence for a modern punk band to evoke the same excitement that I get from blasting Raw Power by the Stooges, London Calling by The Clash, (GI) by The Germs, or even Green Day’s Dookie. These are seminal punk rock records, all from different eras and cultural hubs, and Satan’s Graffiti Or God’s Art fits right in with them as a modern example of aggressive and abrasive, yet artistic punk rock.

A passion for music has always been a part of Gerrod’s life. As a young boy, he was raised on a steady diet of the music from The Chili Peppers, Aerosmith, The Stones, Prince, and others from his mum. Raised in the GTA, Gerrod continued to foster his love for music by attending a wide range of concerts and learning the drums. His unapologetic passion for music has no bounds and has spread to a wide variety of styles, whether it be the 90’s rock that sound tracked his teenage years, the jazz he studied in university, or his newfound love for hip-hop. He recently received his bachelors in music and education from York University and is passionate about writing and reviewing good (and less than good) music. Gerrod is also the drummer and songwriter for a Toronto based rock & roll band, One In The Chamber.
RELATED ARTICLES
album reviewsblack lipsvice records
7.0