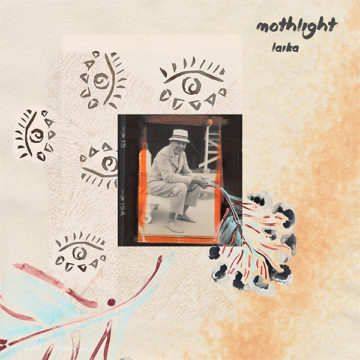 This is the  second album from this Southern California trio.  This album shows a band that continues to mature and a band that knows how to achieve the sound in their collective heads.  Laika is a brilliant, lush, beautiful album.  From beginning to end this album takes you on a soaring trip and does not let go of its protective grip on you.

These three guys know how to use their instruments and voices.  Matt Billings was originally the sole member of the band, writing and recording under the Mothlight moniker.  Keyboardist and guitarist Grant Stevens formally joined the group and the debut album Calico was the result in 2014.  Since then, drummer Andrew Smith has joined and the result is this incredible work.

Their sound could be classified but in all honesty they have carved out their own sound.They use their instruments as instruments, in other words, no loops, computer engineered sounds, but real guitar, real drums (which adds so much) and excellent use of synthesizers.

Then there is the vocals.  Beautiful harmonies, At times so subtle you may forget there is more than one vocalist.  It is beautifully layered and mixed.  Not to make comparisons, but if Crosby, Stills and Nash were beginning today they may sound something like Mothlight.  Credit must be given to Andrew Naeve, who did a masterful job mixing this entire project.

Laika is full of great songs, but the songs form a cohesive album.  You can pick out some favourite songs, but this album works best by listening from beginning to end.  It is nicely sequenced so that the listening experience is one steady flow.  “Laika” flows into “Day/Night”, which draws the listener into “Mt.”.

Helping out on this album is Shannon Inouye, from Emerson Star, who is featured on the song “Monarch”.  His style fits perfectly with the band and it works.

Overall, this album could be lumped into the new ‘electronic pop’ or ‘psychedelic electronica’ but that sells the album too short.  It is a strong album that a great deal of time and effort was put into making it sound as good as it does.  Interesting rhythms, beautiful vocals, stirring lyrics, and brilliant musicianship.

Born and raised in Whitby, Aaron discovered music through his love of The Beatles. This led to a career in radio, writing for various publications, and ultimately a radio show about The Beatles (Beatles Universe), which ran for over four years. When not immersed in music, Aaron enjoys spending time with the loves of his life -- his wife Andrea, and daughters Emily and Linda (all of whom have an intense love of music too).
RELATED ARTICLES
album reviewslaikamonarch
9.0