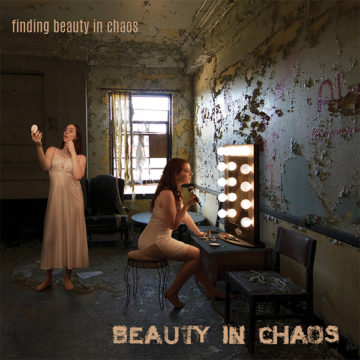 Beauty In Chaos is more a concept than a band. For those old enough to remember, they are kind of like This Mortal Coil, but with Beauty in Chaos, it is all organized and orchestrated by guitarist Michael Ciravolo (Human Drama)  and producer Michael Rozon. And then there are the guests, a veritable who’s who of rock and alternative rock. Joining Ciravolo on this album are Wayne Hussey (The Mission), Ashton Nyte (The Awakening), Simon Gallup (The Cure), Robin Zander (Cheap Trick), Al Jourgensen (Ministry), Pete Patada (The Offspring), dUg Pinnick (Kings X), Ice-T, Michael Aston and Dick Doucette (Gene Loves Jezebel), and Michael Anthony (Van Halen), and that is not the entire list of guests.

Listening to Finding Beauty In Chaos is a little like going back in time. The album has an 1980s goth feel to it, but that is only surface, below that is an album full of interesting sounds and distinct song structures. Also, because this is Ciravolo’s project, there is a consistent feel throughout all of the songs, although there is a lot of input from the various artists, leading to an album full of different styles. It is also interesting to see musicians working together from so many different genres and bands. Who would have ever thought Ice-T, Wayne Hussey and Robin Zander would all appear on the same album? Yet, Ciravolo and Rozon are able to bring all of these artists and styles together. Then he lets artists branch out.  For example, Ministry’s Al Jourgensen would scream his way through T Rex’s “20th Century Boy”. It is one of the many highlights of the album.

For me, the most interesting aspect of this album is that it is guitar based, and no keyboards were used. The textures and sounds come from use of pedals and the layering of sounds, and it works. Because it is guitar-based, it has a fantastic sound that leaps out of the speakers. There is energy to spare throughout this album.

The songs build as does the album. The album flows unto the last song, “Finding Beauty In Chaos”, which starts off very quietly, with the  stirring vocals of Ashton Nyte.  The song  builds and builds until it ends in a cacophony of noise yet still maintains the beautiful melody  of the song. This seven minute opus is the only song that could have ended this album..

Ciravolo has come up with a brilliant album, collaborating with a diverse list of artists. He lets the guests do what they do well and incorporates all of their talent into it to create a cohesive album. Beauty In Chaos is a dark, moody masterpiece for our dark moody times.

Born and raised in Whitby, Aaron discovered music through his love of The Beatles. This led to a career in radio, writing for various publications, and ultimately a radio show about The Beatles (Beatles Universe), which ran for over four years. When not immersed in music, Aaron enjoys spending time with the loves of his life -- his wife Andrea, and daughters Emily and Linda (all of whom have an intense love of music too).
RELATED ARTICLES
33.3 recordsalbum reviewalbum reviews