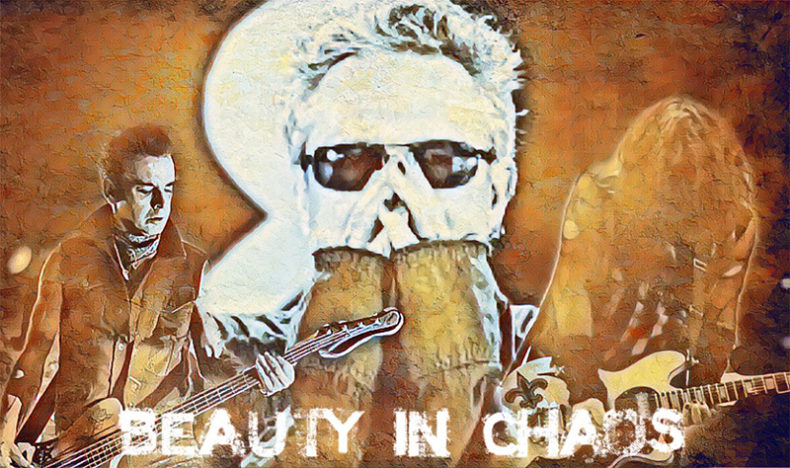 Ahead of the release of their debut album ‘Finding Beauty in Chaos’ on Friday, we introduce you to LA-based artist Beauty in Chaos and are thrilled to be premiering the track ‘Man of Faith’ ft. Wayne Hussey (of The Mission) and Simon Gallup (of The Cure). This track come on the trail of Beauty in Chaos’ blazing track ‘Storm’ ft. Ashton Nyte (of The Awakening and MGT).

Beauty in Chaos is not quite a band in the traditional sense of the term. This project is more like a collective initiative curated by guitarist Michael Ciravolo, working in collaboration with producer Michael Rozon (Ministry) at Ciravolo’s SAINTinLA Studio.

Ciravolo is no stranger to the music scene. Hailing from New Orleans and now based in Los Angeles, Michael Ciravolo has played guitar in Human Drama for the past 30 years, most recently on ‘Broken Songs for Broken People’ (2017). He is perhaps best known as President of Schecter Guitar Research. He also played live and recorded with Michael Aston’s Gene Loves Jezebel since 1998, along with Tish Ciravolo (wife and founder of Daisy Rock Guitars). Seeming much like a reunion of sorts, both she and Michael Aston appear on this album as co-writers and performers.

Upon listening to the 14 tracks on the album, it was a delight to discover such diversity between them, clearly the outcome of some great head-to-head writing between Ciravolo and his various collaborators. Here we find offerings covering indie rock and post-punk to dark wave and hard rock. ‘Man of Faith’ itself is an epic track that any lover of these genres must hear, with a sound that is as sweet as any Mission or Cure track.

“I look at this as an evolving entity that I am the ‘curator’. For this album, ‘Finding Beauty in Chaos’, I am the only guitarist and no keyboards are used, but you will hear loads of textures created from guitars and effect pedals. This is a convergence of textures and styles that I envisioned blossoming,” says Michael Ciravolo.

“Assembling, or in some cases, disassembling beautiful soundscapes, melodies and chords, while injecting harsh bursts of sonics … or visa versa.  Light in the dark, dark in the light is the contrast that helps in realizing the goal of creating something musical that is also very visual and cinematic.”

‘Finding Beauty in Chaos’ will be released on September 28 on vinyl via 33.3 Records and digitally across online stores and streaming platforms. It can be pre-ordered via Bandcamp at https://beautyinchaos.bandcamp.com/album/finding-beauty-in-chaos. 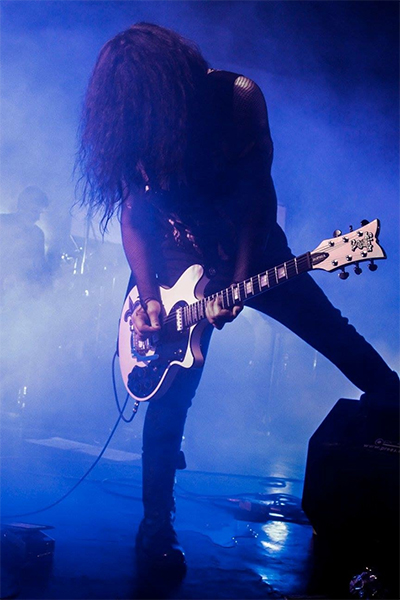 When I joined the Cure back when things were black and white  I made a secret vow to myself that I wouldn’t just haw myself out …I believed that when you are in  a band you stick by that band, and don’t become just a journeyman Muso to further your own ego …I seriously hated all those tits from the 80,s and 90,s who used to pat each other on the back and “hang out”. To me, commitment to one band was a signal fire that you meant it.. but …Then you mellow!

I was lucky enough to meet Michael and his lovely wife Tish and Mark in the 90’s and I think my first comment to him was rather flippant, but I was very used to people from companies coming backstage and asking us to stand in the Broom Cupboard while they held court with Robert. So here I was for the first time, where a genuinely nice bunch of  people were asking me about things like missing home, how I felt how the tour had been going, etc. ( I sort of had to look over my shoulder that they weren’t talking to Robert). It just felt like a normal conversation down the pub with people I knew).

Michael has always been 100% behind getting what the band wanted in regards to guitar designs ,colours shapes, and one of my joys in touring America was always his enthusiasm about guitars and guitarists ! (Michael +Tish + beer + bar ++ Me slightly slumped talking about Johnny Thunders if you get the idea).

So back to where I started… if someone else had asked me to play, I would have probably have said no but I felt this was a special thing, and then the icing on the cake was that Wayne was singing! I could sit here and type for hours to explain what Wayne means to me, but suffice to say, I think he is one of the most underrated rock singers of all time.”

“It was during The Mission’s US tour of 2013 when we played in LA at the Nokia Centre that I actually met Michael and Tish. Fabulously lovely people, I immediately felt very at home in their company. Like long lost friends I hadn’t seen in years. Michael and I kept in touch and then in July 2016, whilst I was in Austin, Texas, to mix the Mission album, Another Fall From Grace, with my old cohort, Tim Palmer, Michael flew out from LA to see me. And we spent a couple of days hanging out, eating Mexican, and staying up late drinking and playing music too loud in a hotel room. Michael mentioned that he was thinking of making a solo album and I said he should and offered to sing on a song or two – if he wanted, of course. Fast forward less than a year and Michael had sent me two backing tracks that he’d recorded that he thought would suit my voice.

I was thoroughly creatively burnt out by the Mission album so was thinking I would struggle writing lyrics for Michael’s tunes. Not so. When I heard the two tracks they both immediately suggested vocal ideas and the lyrics came surprisingly quickly and easily. That’s all it needed to get the creative juices flowing again – a couple of top tunes. And they are. And it’s been a privilege working with Michael, and the other Michael, and Tish. And to cap it all, Michael persuaded our mutual friend, Simon Gallup, my 2nd ever favourite bass player, to play bass on Man Of Faith. Simon and I had been threatening to make music together for years and, and like most good ideas born out of a shared bottle or three, just one of those things we hadn’t yet gotten around to doing. It’s taken Michael to make it happen. And who’s not to say there won’t be more music by the three of us in the future. I hope so, time and schedules permitting.”

This is still a bit surreal for me as they are both icons in my eye and their records have and still spend a lot of time on my turntable.  Having them together on a song for the first time on this song is amazing… and to think it could reignite them doing more together is very special.”

Also check out the new video for ‘Storm’, produced by Industrialism Films and directed by Vicente Cordero.