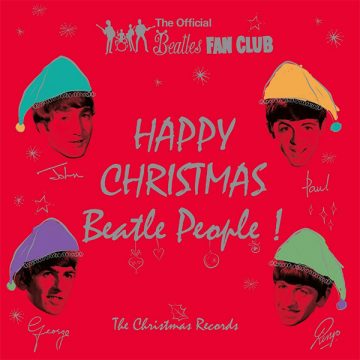 These Christmas flexis became highly sought after collectors items, and they have been bootlegged many many times. Fans who were not around to join the Fan Club missed out and had to buy these bootlegs or pay a lot of money for the original issues. But The Beatles and Apple Records have finally gotten around to issuing them commercially, albeit in a limited edition format. It is a box set of replicas of the original flexis, complete with replicas of the picture sleeves. You get what Fan Club members got over 50 years ago. Also included is a book of the original newsletters that accompanied the flexi-discs.

This may not have been what fans had expected. I think fans were looking for an album, as opposed to this box set of seven flexi-discs. Perhaps an album, both vinyl and CD would have been more commercially viable, but we are dealing with The Beatles and a yearning to replicate history. These discs should be heard in this format. That was how they were always intended to be heard.

One of the most interesting aspects of this collection is the progression of The Beatles. Much like their albums and singles, the first couple of discs (“Sincere Good Wishes for Christmas and The New Year” and “Another Beatles Christmas Record”) are fairly innocent and playful, with lots of wordplay and it sounds like The Beatles are having some fun with the recording. “The Beatles’ Third Christmas Record” is the shortest and borders cynical at times (listen to their version of “Yesterday”), but it is in 1966 that things turn, much like Revolver in their official catalog. Everything changed in 1966. 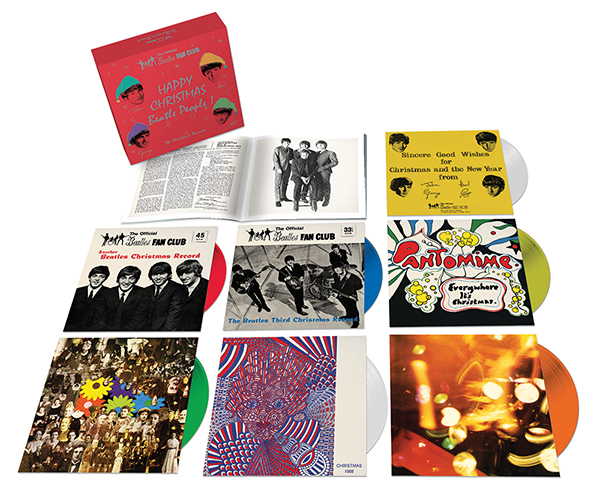 “Pantomime: Everywhere It’s Christmas” is pre-Monty Python hi-jinx. Skits come at you full speed, along with some original music (“Everywhere It’s Christmas”). It is very funny at times, and very weird at other times. This is the one that fans will dissect over and over. It is brilliant and it leads up to 1967s “Christmas Time Is Here Again”.  The story of “Podgy the Bear and Jasper” is a particular favourite.

The 1967 version of “Christmas Time is Here Again” is similar to the 1966 version, but a bit weirder. Actually, an edited version of the main song from this record was issued on the B-side of “Free as a Bird” in 1996, but here it is in its full glory and within its proper context of the actual record. This is Sgt. Pepper in Christmasland and it works, from beginning to end. That song and “The Game Show” (‘How old are you? 32. You’re not! I am’ exchange between George and John) are just two of the many highlights.

By 1968 the cracks are beginning to show, and “Christmas 1968” and “Happy Christmas 1969” are solo bits edited together by famed U.K. disc jockey, Kenny Everett. The Beatles never appear together on either of these records, and much of the humour is gone. McCartney provides very sincere and beautiful acoustic songs (1968’s “Happy Christmas, Happy New Year” would not be out of place on The Beatles [aka The White Album] and  1969’s “This is To Wish You A Merry Merry Christmas” would fit  well on McCartney). Tiny Tim (the singer) guests with George and Ringo provides a great deal of the humour. Yoko also makes an appearance, and in fact the 1969 record is mainly John and Yoko.

While not essential to own, they do serve as sort of a missing piece to the puzzle. The Beatles had a sense of humour and a love for the absurd. The fact that their producer, George Martin had produced The Goon Show, the outrageously funny BBC show that all four Beatles loved, helped him gain their respect. Harrison’s love and financial support of Monty Python’s Flying Circus is well known, but here he is doing things that they would do four years later on their own records. In an unintended way, even these records they were influential. They were meant as a thank you to fans, but again, they influenced others.

The Beatles have always been very fair to their fans and this release is no different. It is beautifully put together and is well worth the money. For the second time this year, they have knocked it out of the park in terms of reissues.

When I was young, many Toronto radio stations would play these records on Christmas day. They bring back many memories for me, and it is nice to have wonderful clean versions. The sound is perfect, and they have not remixed or changed the original records. This is fantastic news, as sometimes after they are remastered they do not sound quite the same. In this case they do.

R.E.M., Siouxsie and The Banshees, Soft Cell, Marc Almond, New Order and many others would follow suit in issuing a special album to fans, but The Beatles, as usual, did it first and did it best, as these records show. This is an incredible release and one that will be treasured by fans of all types. Christmas just got a whole lot better in 2017.