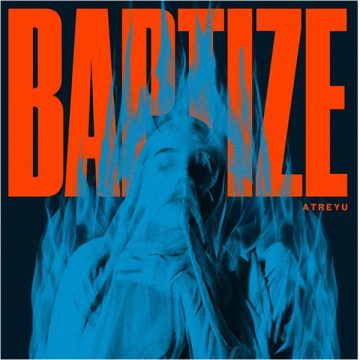 Baptize is Atreyu’s eighth album, but their first since the departure of vocalist and founding member Alex Varkatzas who left the band in the fall of 2020. Ex-drummer and clean singer Brandon Saller has stepped forward as frontman, while bassist Marc “Porter” McKnight has taken over screaming vocals. Completing the new lineup is drummer Kyle Rosa.

With Saller having been a staple of the band’s sound for approximately 20 years, it’s not such a harsh transition for the band with him now as lead vocalist. With the growls of McKnight, vocal-wise they complement each other very well.

The title track of the album carries an energetic note, with its fast-paced rock anthem tone. Halfway through the album, however, it loses its momentum. More than half the tracks are under three minutes, and many of the songs fall flat with generic lyrics and choruses that soon ring hallow. Many of the songs sound similar and lack creativity.

While many of their songs in the past have gotten plenty of airplay with their radio-friendly catchy riffs and simple choruses, “Warrior,” is very much the same. With it being an anthem of perseverance, don’t be surprised if the song ends up as background music for the many inspiring human-interest stories you come across, not to mention the potential to be played in sports arenas.

The album as a whole seems to be lacking but I can’t quite put my finger on it. Maybe it’s because it feels like some of that aggressive, emotional energy was sacrificed for mainstream appeal. Contributions from singers Jacoby Shaddix of Papa Roach on “Untouchable,” Trivium​’s Matt Heafy on “Oblivion,” or drums from Travis Barker of Blink 182 on “Warrior,” didn’t make any of those tracks stand out in particular.

Even though backed by long time band members, the album was overall underwhelming.

Trista’s a music addict who’s taste in music spans over numerous genres. She enjoys playing her bass guitar, but honestly she’s not very good at it. So she goes to concerts and watches real musicians who are far more talented than her. You’ll find her there in the front row, because, well, she’s short and wouldn’t be able to see the stage very well otherwise, and because she strives to get the perfect photo to capture the experience.
RELATED ARTICLES
album reviewalbum reviewsatreyu
8.0