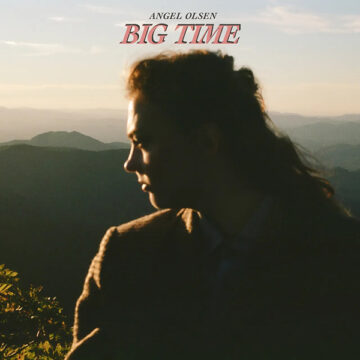 A country album by Angel Olsen is something I never knew I needed. But I did, and I got it… with a twist. “Out with the bangs, in with the twangs,” she declares. Olsen’s albums have all been different stylistically from each other — All Mirrors is an epic album featuring a 14-piece orchestra, while My Woman could pass for indie rock — and in each one, she bends the genres as she sees fit.

“I can’t say that I’m sorry when I don’t feel so wrong anymore,” she sings plaintively on the album’s first track, “All the Good Times.” She is accompanied by subtle guitar and drums, and the track first seems like melancholy country-folk. About halfway through, though, it erupts into a full-band explosion with resounding vocals, horns blaring, drums pounding, and ends with the lyric “Thanks for the free ride and all of the good times!”

Big Time captures emotional ups, downs, and everywhere in between. It was created right after Olsen went through incredibly intense life events. In April 2021, she came out as LGBTQ, and telling her parents had been something she’d been avoiding for a long time. “Some experiences just make you feel as though you’re five years old, no matter how wise or adult you think you are,” she says. Three days later, her father died. It was at his funeral when she introduced her partner, writer Adele Thibodeaux, to her family. Weeks later, her mother died. Just three weeks after that, Olsen began to record the album.

The title track, “Big Time,” comes next. It’s a catchy, twangy love song co-written by her and Thibodeaux; easily the warmest and brightest on the album. Contemplative tracks like “Ghost On” and the deeply sorrowful “This is How it Works” are country-tinged tales of longing and loss, while “Go Home” steps right out of the country genre into alternative rock territory. Olsen’s reverb-heavy voice belting out “I wanna go home/go back to small things/I don’t belong here/nobody knows me” evokes Tori Amos or PJ Harvey. Olsen’s music really shines when it hits the extremes, through powerful vocals and an explosive backing band, or the complete back-to-basics opposite. One of my favourite tracks, “All the Flowers,” is the most stripped-down on the album.

Big Time is about love, loss, grief, courage, and identity; Olsen interweaves these themes throughout. The album’s tracks have marked differences from each other, but what they have in common is their pure honesty and vulnerability. Olsen communicates what she’s feeling by laying it completely on the table. She has been deservedly complimented for her ability to be so open in her music — Sharon Van Etten, her co-collaborator on the 2021 single “Like I Used To,” says she harnesses struggle and grief and uses it for good, praising her ability to share herself so honestly. On “Right Now,” Olsen begins with a soft, swingy melody, before wailing out the first line of the chorus, “Why’d you have to go and make it weird?”. Olsen has an innate ability to deliver common-sounding phrases and make them sound anything but. The only spot where her music feels slightly lacking is when it stays fairly even-keeled. Songs like “Through the Fires” and “Chasing the Sun” are good listens, but a little more energy and experimentation would make them more memorable.

Despite its understated tone in comparison to her previous full-length albums, Big Time is ambitious. In addition to the traditional instrumentation, it also features strings, horns, organ, harpsichord, vibraphone, and steel guitar (I love some good steel guitar, and its ever-presence on an Angel Olsen album is something else I never knew I needed). The songs brought a variety of artists to mind; in addition to those mentioned above, I hear traces of Lucinda Williams, Emmylou Harris, Hank Williams, and Patsy Cline.

This is a country album at heart, after all, with that trademark Olsen flourish. And it works.

Meryl has loved music from the early days when she'd bring her parents' records up to her bedroom and play them on her plastic Sesame Street record player. She is an appreciator of a wide variety of genres, an enthusiastic concertgoer, and a musician. She has also been a writer and editor for years, so combining these passions to review music was a no-brainer. She currently lives in Toronto; you might find her honing her skills at open mics around town. Don’t forget to check out our Facebook and Twitter pages for all daily Spill updates.
RELATED ARTICLES
album reviewalbum reviewsangel olsen
9.0