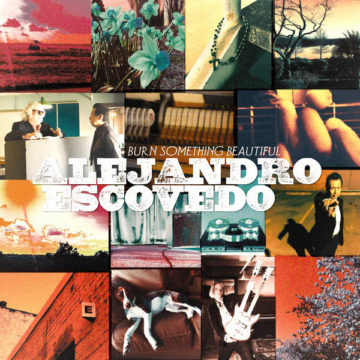 Where do you see yourself at age 65? Early morning breakfast at Burger King, rummaging through the morning paper while the waitress waddles over with your Early Bird Breakfast Special? Well if you are Alejandro Escovedo, hopefully you are still writing beautiful songs, touring with one of the best backing bands in Texas, and releasing albums that carry on the troubadour tradition. Escovedo’s latest album Burn Something Beautiful is no exception. The album is a wonderful mix of soft acoustic songs with meaningful lyrics, sprinkled with a flurry of rocking, feet thumping tunes that keep you moving.

Born in San Antonio Texas to Mexican immigrant parents,  Alejandro grew up in a family of musicians. His brothers Javier and Mario were all members of hard rock or punk bands throughout Texas. His uncle Peter is father of percussion legend Sheila E. Alejandro himself started out in San Francisco punk band The Nuns. Not until the 1980s, when Alejandro moved to Austin, Texas, did he adopt his roots rock/alternative country style.  As Austin is considered one of the greatest music cities in the USA, especially for live music, you really need stand out to make it.  Alejandro had the gift.

Today Alejandro is an Austin legend, along with such greats as Tom Russell, Guy Clark, Doug Sahm, and Phil and Dave Alvin. These great songwriters may not have the country or world wide fame that they well deserve, but they most certainly have the respect. In 1997, Alejandro collaborated alongside Ryan Adams and Whiskeytown on their album Strangers Almanac, where he sings vocals on three tracks. In 1998, No Depression magazine named Escovedo Artist Of The Decade – there’s good reason why.

On Burn Something Beautiful Escovedo taps into the Texas troubadour songwriting style that he’s adapted over the years, but here he’s added gritty distorted guitars to great songwriting.  On some tracks, such as “Luna De Miel” and “Horizontal”,  you can really hear his punk roots.  He then alternates between that gravelly guitar style and acoustic beauty, as in “Suit Of Lights”,  which gave me huge chills with the first few guitar plucks.

If there is one song that should be listened to first on this album to really open your mind to the world of Escovedo’s writing style, to really appreciate him, it is “Suit of Lights”. It has become one of my favorite songs lyrically, with lines piercing your skin such as ” Watched you shower, Watched you bathe, Put everything I have in every kiss we made. Brought you silk, brought you jade, A bucket of blood in every note I played.”

Get the album and listen to  music that really means something.

The Spill Magazine is a Toronto-based online publication dedicated to covering the independent music scene with a strong focus on our thriving hometown talent. Our writers bring you up-to-date news, in-depth features on musicians and reviews for the latest CD releases. We also travel to the front lines for all local festivals including Canadian Music Week and North by Northeast.Don’t forget to check out our Facebook and Twitter pages for all daily Spill updates.
RELATED ARTICLES
album reviewsalejandro escovedoconcord music group
8.0