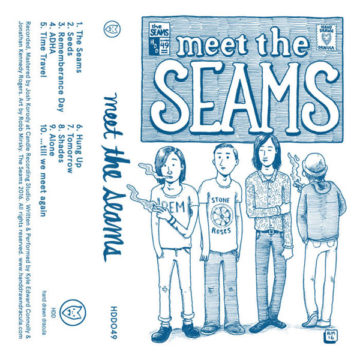 The Seams are a fairly new Canadian band formed by members of Toronto indie bands WISH, Fake Palms, Elsa, and U.S. Girls. Together they create simple tunes influenced by rock and pop from the 60s straight through to the 90s. Formed to experiment with straightforward and simplistic guitar riffs, many of the songs on their debut album Meet The Seams would sound right at home on an album released decades earlier and bring a certain vintage charm to their songs.

The Seams have a familiarity about them. With a lot of influence coming from a lot of different places, their songs exude an old-school vibe that would sound right at home blazing from a 70’s AM radio. They sound similar in nature to early REM, Guided By Voices, or even Paisley Underground. Songs on Meet The Seams carry a very similar sounding mix of jangly guitar, thick bass, and mellow vocals. With almost every song containing the same surf-friendly brit-rock sound, it is difficult to select any one distinct track. “Hung Up” seems to break the cycle by altering the rhythm slightly. Most of the tracks are mixed quite heavy on instrumentals and seem to shove Kyle Connolly’s vocals to the background often rendering his lyrics borderline unintelligible.

The Seams present a very simplistic approach to retro-rock and while they do manage to capture a laid-back college rock sound, they do not present much variety. As recorded by Josh Korody, The Seams are a to-the-point band with a very clear intent. Primary songwriters Connolly and Jonathan Rogers do show some promise in their latest side-project yet it likely won’t garner the same reputation as some of their other musical ventures.

I am an Edmonton based musicophile and photographer who loves experiencing music whether it's live or on my turntable. I play seven instruments and go to a lot of concerts.
RELATED ARTICLES
album reviewshand drawn draculathe seams
7.0