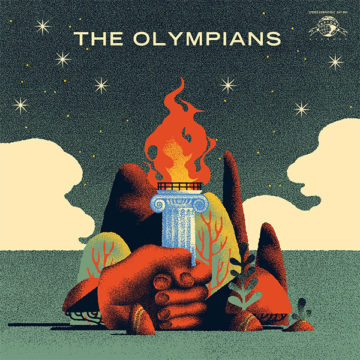 Over the past 15 years, Daptone Records have cemented their position as a leader in funk, soul, and R&B by rostering acts like Sharon Jones & The Dap-Kings and Charles Bradley. Daptone releases are well known for their classic soul sound and the incredible musicianship behind them. The Olympians are a collection of soul’s finest musicians as assembled by Toby Panzer who channels the signature sound of Daptone in a modern and instantly recognizable way.

After playing the Acropolis in Athens and swimming in the Aegean Sea, Panzer was visited by a dream and inspired to create a “Temple of Sound”. Once back in New York, Panzer set out to create this “Temple of Sound” by utilizing some of the best musicians and equipment in New York to immortalize his vision in music. As a member of the Daptone family, Panzer was already in contact with some of the world’s premier soul musicians and could understandably call in a favour or two. Some of these musicians include Dave Guy, Homer Steinweiss, and Neal Sugarman of the Dap-Kings, and Michael Leonhart – the music director for Steely Dan alongside many other talented individuals.

The Olympians use their shared experience to create a respectable and classic sounding instrumental soul album. While this self-titled debut doesn’t present anything terribly revolutionary it doesn’t exactly sound stale either. Many riffs are implemented and manipulated in slightly unexpected ways to create fresh sounding tunes and catchy hooks. “Europa and The Bull” offers stellar organ playing reminiscent of Billy Preston while “Pluto’s Lament” echoes sounds of a chill Issac Hayes. Overall it maintains it’s soulful nature whilst injecting some modernity into its classically funky tracks.

All the tracks feature names of Greek mythological figures, this theme plays nicely with the band and album’s namesake.

Taken in its entirety The Olympians is a delightful soul album that projects Daptone’s signature sound in a respectable fashion. It won’t drastically change soul, funk, or R&B but it does feature some of today’s best musicians doing what they do best.

I am an Edmonton based musicophile and photographer who loves experiencing music whether it's live or on my turntable. I play seven instruments and go to a lot of concerts.
RELATED ARTICLES
album reviewsdaptone recordsthe olympians
8.0