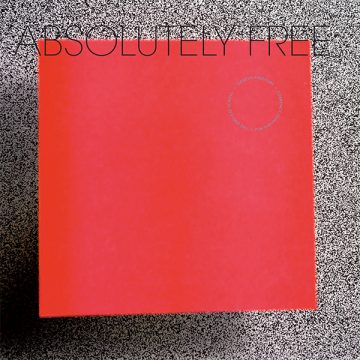 The Toronto trio known as Absolutely Free have just released a new EP titled Geneva Freeport, and it is a hypnotic 21-minute followup to their self-titled debut album of 2014, which also happened to be long-listed to the Polaris Music Prize. It has been five years since then, but the band’s patient, thoughtful approach to releasing music has led to an EP that is rich and tense and beautiful and I can only imagine how incredible it would be to see them at a live show.

The songs on here are each different, with the opening track “Geneva Freeport” as a thumping, tense, tinkling, slow-rising space song, with sermon-like vocals that could soundtrack your strangest dream. The standout track is “Currency” featuring Meg Remy of U.S. Girls, and the addition of Remy on vocals is a major highlight and her feminine touch distinguishes this track from the others as a sexy cosmic dance tune that you can use to start a sci-fi dance party anytime you want. The closing track, “The Endless Scroll (featuring Carl Didur)” is a nearly ten-minute odyssey of cosmic psychedelia in which the band gets to really showcase the result of their patient approach by creating a rich, detailed, flowing sonic experience that is mesmerizing in a pair of good headphones.

All 21 minutes of this EP are difficult to turn away from, and it displays, almost track-by-track, the different sorts of emotions and energies and potentials Absolutely Free are capable of creating. I want more of this.

Dan Kennard is an English teacher and fiction writer living outside Kansas City, Kansas where he lives with his wife and children. More about his work can be found at amazon.com/author/dankennard. You can also follow him on Twitter and Instagram @kennardistry or contact him at [email protected]
RELATED ARTICLES
absolutely freealbum reviewalbum reviews

by SPILL NEWS on April 25, 2016
SPILL MOVIES: ABSOLUTELY FREE SOUNDTRACKS TWO CARES DUE NONE PREMIERES MAY 13 AND MAY 15 AT ROYAL CINEMA IN TORONTO Known for its transportive works in both sound and vision, Toronto minimal-psych trio Absolutely Free has just announced its [...]

by SPILL NEWS on November 5, 2015
BONNIE RAITT ANNOUNCES 2016 DIG IN DEEP TOUR DATES Following the highly-anticipated release of her twentieth album, Dig In Deep (out February 26, 2016 via Redwing Records), Bonnie Raitt will kick off her 2016 North American Tour, returning to [...]

by Andrea Paré on January 30, 2015
Absolutely Free @ Geary Lane, Toronto January 30th, 2015 There are some things that are worth the wait. Fans patiently waiting for the the release of Absolutely Free’s debut album were rewarded last October and last Friday they got to listen to [...]
8.0