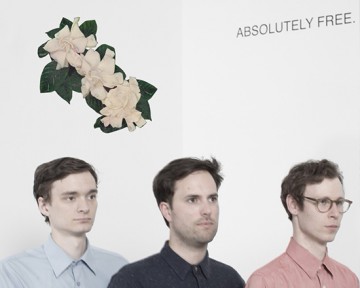 There are some things that are worth the wait. Fans patiently waiting for the the release of Absolutely Free’s debut album were rewarded last October and last Friday they got to listen to it live. That lapse in time perhaps helped to build the excitement that was palpable in the air at their sold out launch show at Geary Lane.

Located off the beaten track, in an industrial area near Dufferin and Dupont, the almost warehouse-like Geary Lane is the ideal venue for a band known for playing eclectic locations.

Inside, the studio that has been used for recording and artistic events looks the part: at the back there are couches to lounge on, the air is replete with the cloying scent of patchouli, and there is a bar stocked with drinks. Because it is an Absolutely Free show, the cocktails are naturally named after Absolutely Free songs, like Spiral Jet Tea and Beered Lens (named after songs Spiral Jetty and Burred Lens, from their latest work).

Headlining the show is U.S. Girls, aka Megan Remy, whose haunting crooner-style vocals and catchy dub reggae-ish beats warms up the crowd. Her vocals are reminiscent of Lana Del Rey and Beth Gibbons, and her presence is laced with a dark edge that is both seductive and smart. At the end of her relatively short but sweet set she introduces the band with a deadpan: “Absolutely Free are on next. I hear they are in it for the money.”

If you know Absolutely Free, you get the joke. Even if you don’t, its clear their motivations are artistic by nature. Behind the stage a white wall projects their album cover, a painting of a ladder and a bouquet (designed by singer Matt King, who also doubles as an artist.) As the show starts, psychedelic geometric patterns and live video of the band are also projected onto the white wall. It is quite a sight to behold, but not surprising, given that these guys usually go all out at their shows. 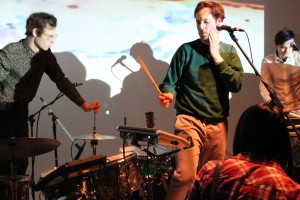 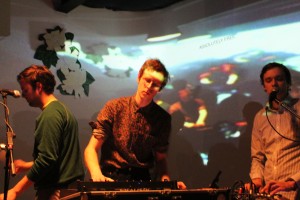 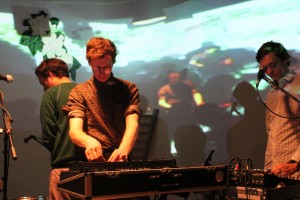 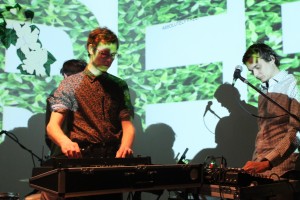 They kick off the show with the first song on their new record, Window of Time, which featured an extended coda with a drum beat that is not on the album, and is therefore a thrill to witness live. Drummer Moshe Rozenberg is a whiz kid with drumsticks and a wonder to watch as he flails his drumsticks like they were attached to his arms.

He stays on drums while they play their older single “On the Beach,” and then the newer “Beneath the Air” and “My Dim Age” from the new album.

On the cosmic “Earth II” they shuffle their duties – Matt goes on percussion while Moshe plays the synth.

One concertgoer declares the band “is sick,” articulating what most in the crowd were feeling, as they shake and nod in time with the steady tide of undulating beats. 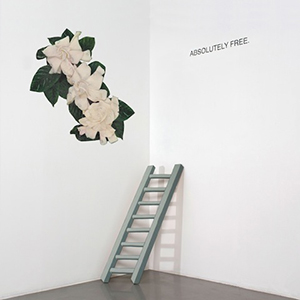 There is little banter between songs, until King tells the crowd that there will be an intermission, and that it’s a good time to get a drink.

When they come back from the break, they are clutching their Absolutely-Free-themed drinks to play the beautifully layered ‘Burred Lens.’

Then, another oldie: “Clothed Woman Sitting,” followed by two other songs from their latest. “Striped Light” got the crowd buzzing, and finally they showcased “Spiral Jetty,” the epic closing song that featured three exciting musical guests: producer Mike Haliechuk of Fucked Up, Joseph Shabason of bands Diana and Destroyer, and sound engineer Marcel Ramagnano, who also helped with the recording on the Absolutely Free album.

A climactic ending to a long-awaited show that was inspired and got most of the crowd dancing, despite the venue being near to capacity. Next time, they may need a bigger venue.

Native Quebecer and freelance writer Andrea Paré first began using music as a drug in her teen years to escape the drab experience of growing up in the suburbs. Now as a full grown adult and living in Toronto, she has a healthier addiction to discovering new musical artists and watching as much live and local music in her adopted city as she can.
RELATED ARTICLES
absolutely freetoronto
9.0

by SPILL NEWS on April 25, 2016
SPILL MOVIES: ABSOLUTELY FREE SOUNDTRACKS TWO CARES DUE NONE PREMIERES MAY 13 AND MAY 15 AT ROYAL CINEMA IN TORONTO Known for its transportive works in both sound and vision, Toronto minimal-psych trio Absolutely Free has just announced its [...]

by SPILL NEWS on November 5, 2015
BONNIE RAITT ANNOUNCES 2016 DIG IN DEEP TOUR DATES Following the highly-anticipated release of her twentieth album, Dig In Deep (out February 26, 2016 via Redwing Records), Bonnie Raitt will kick off her 2016 North American Tour, returning to [...]
8.0