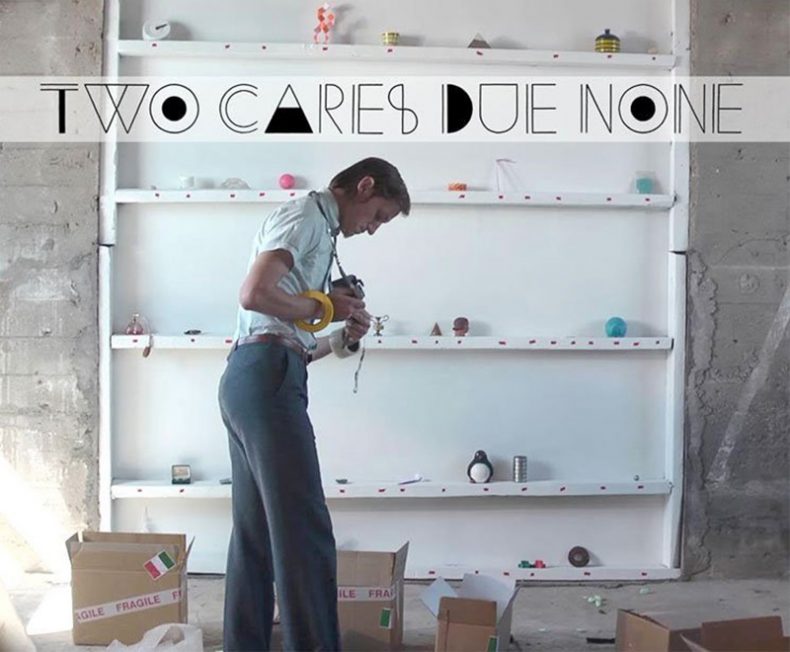 PREMIERES MAY 13 AND MAY 15 AT ROYAL CINEMA IN TORONTO

Known for its transportive works in both sound and vision, Toronto minimal-psych trio Absolutely Free has just announced its soundtrack for feature film Two Cares Due None. This marks the band’s first foray into feature-length film composition, after recently scoring short films by Norman McLaren of the National Film Board of Canada, and works by Workman Arts filmmakers in association with Fucked Up’s West Of Zanzibar soundtrack launch. The moody, minimalist score ranges from reflective ambience to polyrhythmic electronic music bringing to mind the iconic works of John Carpenter, Tangerine Dream, contemporaries Cliff Martinez, Geoff Barrow, and Ben Salisbury.

“The film entranced us into a distinct musical universe,” describes Absolutely Free. “There was no resisting its aesthetic demands, which lead us deep into compositions that indulge mood over melody, exploring the subtleties at the periphery of what we have created live and on record up to this point.” To mark the film’s announcement, Absolutely Free shares “Full Sweep”, a musical passage from the official soundtrack which the band will release later this year.

Two Cares Due None is an independently produced feature film by Chris Boni and Melissa Fisher, visual artists using filmmaking as a platform for fictional worlds and experimental narratives. Shot on location in Iceland, Italy, and Toronto in 2013, this art-house film mitigates between magic-realism, suspense, and mystery, exploring the ways different cultures place value on objects. Managed by a boss in Italy, The Caretaker is hired to carefully remove the personal belongings of six Icelandic individuals, transcending these artifacts with exemplary worth as they travel through the Canadian art and Italian black markets.

The film introduces a vibrant cast of Canadian and Italian actors who played fundamental roles in the gestation of the story. “The independent nature of the film dictated the wildest ride, from shooting through the never-ending daylight of Iceland in June, to blocking one of the closing scenes in a breathtaking piazza in Italy while the entire town sat off-camera and watched,” says Melissa Fisher. “What was revealed to us during our production voyages to Iceland and Italy was the mystical links that our pre-written script shared with the native culture,” Chris Boni adds. “Working intuitively in a foreign landscape and culture enriched the aspect of chance that this fictional piece is steeped in.”

Two Cares Due None will receive its world premiere over two screenings at Toronto’s Royal Cinema on Friday, May 13 (evening) and Sunday, May 15 (matinee). Both screenings will be followed by a Q&A mediated by Mike Hoolboom, acclaimed experimental filmmaker and founding member of Pleasure Dome. Listen to “Full Sweep” from the soundtrack and stream the trailer for Two Care Due None below.

Two Cares Due None Links

SPILL NEWS strives to keep our readers up to date with news and events in the music industry. We keep you informed of the most recent information regarding new releases, tour dates, and information items about your favourite artists.
RELATED ARTICLES
absolutely freenews
9.0

by Andrea Paré on January 30, 2015
Absolutely Free @ Geary Lane, Toronto January 30th, 2015 There are some things that are worth the wait. Fans patiently waiting for the the release of Absolutely Free’s debut album were [...]
8.0