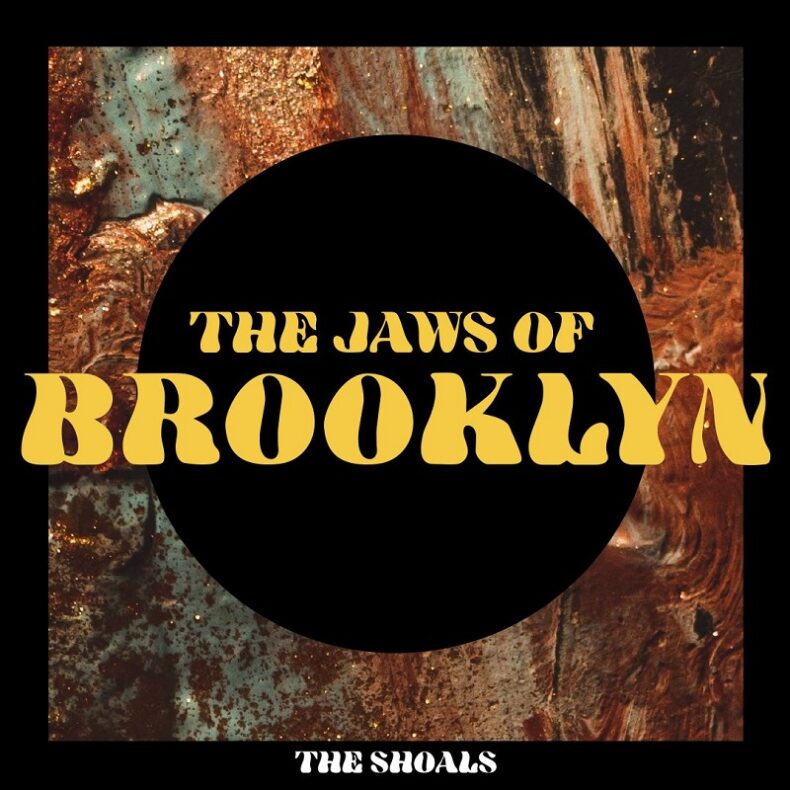 THE JAWS OF BROOKLYN – THE SHOALS

Recorded in Alabama’s Muscle Shoals region at Sundrop Sound, a studio co-owned by Ben Tanner (Alabama Shakes) and John Paul White (Civil Wars), the debut album from The Jaws of Brooklyn, The Shoals, embodies the sun-soaked soul and seductive grit while standing at the crossroads where rock and roll and soul converge. The album, co-produced by Tanner and the band, due out July 22 cradles a vintage 60’s-reverb sound that still feels modern – as if Aretha, Otis, and Mick were sharing a drink with the band after each session.

The Shoals dances between smoldering sizzle, psychedelic smoke, and bright vintage-soul arrangements to capture the heart of its namesake region. Guitarist Bryan Cohen layers shimmering tube melodies that can shift from tremolo-driven twang to punchy buzz in an instant. Paul Christofferson’s warm, round bass and Zia Uddin’s percussion could set up shop in the heart of Motown without missing a beat. All of the components set the stage for Lindsay Love’s dynamic range of vocal melodies. From the unapologetic feminist anthem “Fever” to the upbeat British invasion single “Forever and a Day”, her voice soars with a harmonious register fit for every situation.

Not only did the group meet during the height of the pandemic, but they wrote and recorded the album during that timeframe as well. As a Seattle-based band, they needed a change of scenery away from the clouds and opted for a place that aligned with their personal musical roots. In addition to producer duties, Tanner added his keyboardist skills using a series of analog keyboards and organs to capture the Muscle Shoals sound alongside bells and tape reverb to imbue the tracks with a retro feel. Love explains, “We wanted the songs to have a feel and vibe that the listeners would want to hold onto. We wanted retro touches with modern melodies and themes.”

Each listen uncovers a different flourish and musical nuisance. Whether it be the perfectly blended soulful croons on “All that is Golden,” the upstroke jangle on “Whose Heart is This,” or the bassline that won’t quit walking in “Sugar Sugar,” it’s a catalog of influence, originality, and unbottled energy.

“When it came time to decide where to go and who we felt could produce an album for us that encapsulated the essence of our sound, it became clear almost immediately that Ben Tanner was our guy and The Shoals, given its rich history in producing some of the best artists and music which directly influenced our own, was the place to make these songs come alive.

The ten days spent at Sundrop Recording studios were, to this day, some of the most memorable times we’ve had together as a band and we are forever grateful for the experience of recording our first album among some truly incredible musicians, in an area that was and is filled with so much warmth and hospitality, steeped in rich music tradition. We named our first album after this area as an homage to the lasting impression the south and its people left on us; to show gratitude for and remembrance of where we started.” ~Lindsay Love

The Jaws Of Brooklyn
The Shoals
(Independent)
Release Date: July 22, 2022

by Michelle Cooney on September 20, 2019
Brittany Howard Jaime ATO Records Brittany Howard dominates in her debut solo album Jaime. The guitarist and vocalist of Alabama Shakes simply can’t conform to any musical style on this [...]

by Daniel Adams on October 1, 2014
THE SPILL MAGAZINE ARTIST PORTRAIT: ALABAMA SHAKES “We took our time to write this record, and I’m really glad we did,” says Brittany Howard, lead singer and guitarist of Alabama [...]