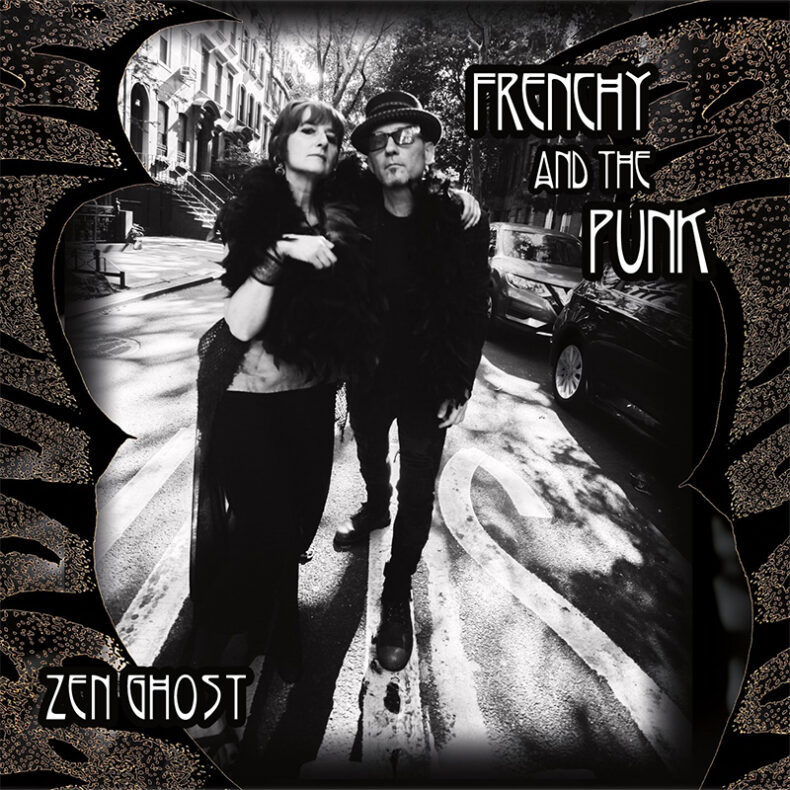 FRENCHY AND THE PUNK – ZEN GHOST

Today we have the pleasure of revealing the Zen Ghost album from NYC-based postpunk / dark pop duo Frenchy And The Punk. Half American, half French, they have made The Big Apple their creative launch pad and it sure has paid off, this being the band’s seventh full-length album – it will be released via the EA Recordings label.

Frenchy And The Punk is vocalist, percussionist and lyricist Samantha Stephenson and guitarist-composer Scott Helland, who was co-founder and bassist of Outpatients and also Deep Wound (along with Dinosaur Jr. founders J Mascis and Lou Barlow). Together, they are well known on the music scene for their unique merging of post-punk and dark folk music. This album, however, sees them more solidly in the post-punk realm, much of it vibrant and danceable. Who says dark can’t also be fun? Zen Ghost which may be among the year’s best albums to date, is a highly recommended listen.

Not long ago, the band released two sublime and lush tasters of this new record – the vigorous and mosh-ready “Mon Souvenir” and a more Siouxsie-esque single called “Come In and Play”. While Siouxsie and the Banshees and Concrete Blonde are the two bands most referenced when describing the band’s sound, certainly others have been mentioned as well – Florence and the Machine, Blondie, Grace Slick, The B-52’s and Dresden Dolls.

Dark times make for dark songs. On Zen Ghost, the duo’s shadowy sound takes an even darker turn. An inward spin, into the pair’s previously unexplored personal planes and interpretations of the insanity of our increasingly tumultuous age. But despite its more pronounced moodiness, like the rest of the band’s oeuvre, Zen Ghost offers plenty of opportunities to dance in the darkness.

“We started writing Zen Ghost at the end of 2020 and have a few tracks that were written as recently as Spring 2022. It highlights the darker tones of what we do and is influenced by the environment in which we all live in at the moment,” says Samantha Stephens.

“The core theme to the album is ‘mind phantoms,’ the ghosts of our past that reside in our minds and can influence our present. The theme of breaking the chains of life choices that don’t align with one’s true authentic self has been rampant in the lyrics throughout the years. This record delves into the remnants of the voices and experiences that can still haunt us. This is the album we’ve always wanted to make.”

French-born, but raised in the UK and USA, Stephenson’s study of piano and dance ignited her eventual rejection of corporate conformity and fueled a quest to lead a truly autonomous life through art and music. A son of jazz-loving teachers, Helland grew up in Western Massachusetts and was a vital player on the region’s fertile early hardcore punk scene.

Helland and Stephenson met in NYC in 1998, when Stephenson spontaneously jumped on stage to accompany Helland during his solo guitar performance. The artistic union was immediate, powerful and undeniable. The two began to tour with fevered zeal, turning heads with their striking aesthetic, steadily building fervent fans on the mystical-folk/steampunk festival, coffeehouse, convention, and club circuits with their boisterous, revival-like live shows.

Over the years, they’ve performed live with Dead Can Dance’s Peter Ulrich and Dresden Dolls’ Brian Viglione, and opened for Thomas Dolby, Dinosaur Jr., The World Inferno Friendship Society, Rasputina, Cruxshadows, Hurray For The Riff Raff and The Young Dubliners.

This Friday, the Zen Ghost comes to life across fine digital outlets, including Apple Music, Spotify and Bandcamp. For audiophiles, collectors and lovers of old-school traditions, it can also be ordered on CD via the band’s website.