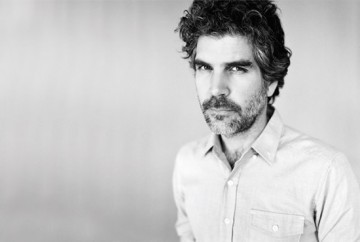 What do you do when you are in your 20th year since your debut album was released and you are planning some shows to celebrate the release of your new album? Obviously you choose three small Toronto diners on three consecutive days (at least that was the original intention) to play songs for the lucky souls who were able to squeeze their way into the tight venues. The show at Lady Marmalade, an independently owned popular brunch spot in Toronto’s east end, marked the second of the three shows. The first performance, the only one to feature a full backing band, was at Caplansky’s Deli on March 24. Two of the three shows, including this one at Lady Marmalade, had to be postponed a week due to Hayden coming down with the flu. Early on in the set he thanked the crowd for their understanding and playfully wondered how he’d made it through the set at Caplansky’s.

As the crowd, which had been waiting patiently outside the front doors, entered the diner, they could see Hayden being interviewed by a CBC correspondent. Upon entering, each person was given a “song menu” that included a sample of songs covering all eight full-length studio albums, including the currently released “Hey Love,” and the 1996 EP Moving Careful. Patrons were asked to “place their order” for songs off the menu, to which Hayden would align his set list according to their requests. It was a creative gesture that fit the theme of “Hayden’s Diner” very nicely. How many requests actually made it to the overall set list is not known for sure, but this is what was played: 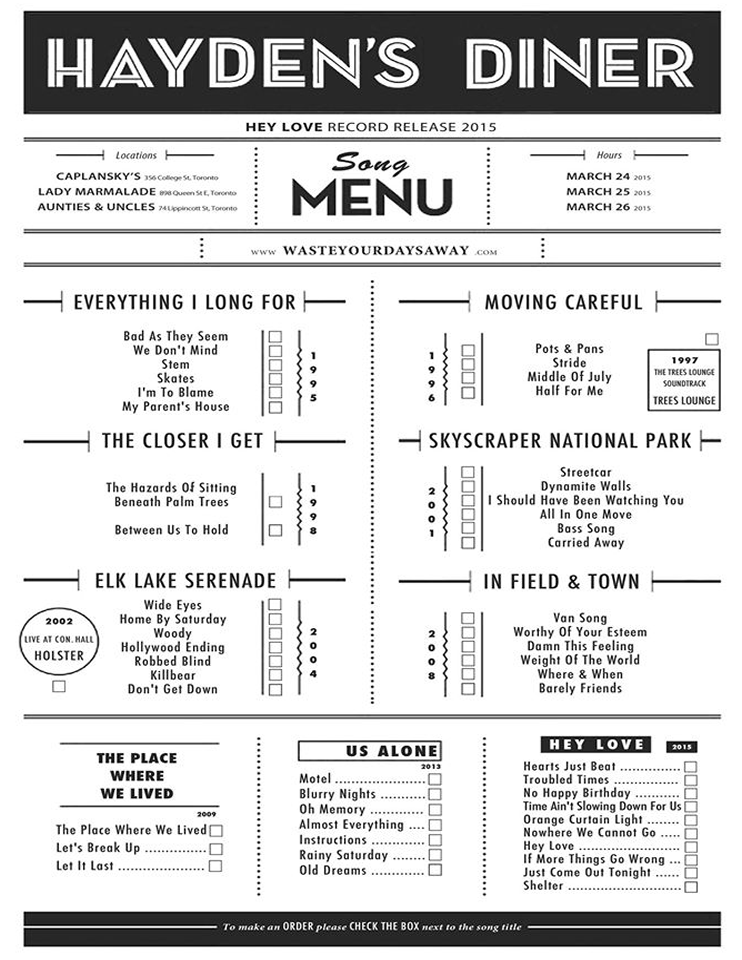 It was a relatively short set compared to an average Hayden show, but that was by design based on the nature of the event. The “reliably real” (to quote Maggie Wrobel of the Globe and Mail) Hayden was in good form and good spirits throughout the set. He revealed that his decision to perform these three shows, which have come to be known as “Hayden’s Diner Series,” was born out of a desire to do something different, to honour the independently owned eateries in the city, and to draw connections with a number of songs in his catalogue that involve eating (like in the last line of “Wide Eyes”). Before playing “I’m to Blame,” Hayden revealed it was one of the first songs he had ever written, and it was composed on his parents’ piano. He prefaced “Woody” by announcing that his beloved cat (who is the song’s namesake) had died recently. This segued into a brief story of his other cat, Movie, who has trouble understanding that the front and back door of his house both enter the same dwelling. Movie may have been cuter than Woody, but was not as sharp. The contrast in tone, from his upbeat banter between songs to the somber songs themselves, was not lost on the crowd, who had all, no doubt, seen Hayden’s live show on more than one occasion. Between the often soberly thoughtful songs he delivered, there was a sense of humour in his banter that filled the breaks. It was almost like he was offering a spoonful of sugar before giving you your medicine.

The preamble to “Troubled Times” revealed the song was originally composed in a stripped -down acoustic manner, but he decided to go “disco” for the album track, to “try to make a hit.” The song’s title turned out to be foreshadowing the stumbles Hayden had in recalling the lyrics while performing it; but his charm and poise stilled any uncharitable feelings that may have crept into the fans’ minds. 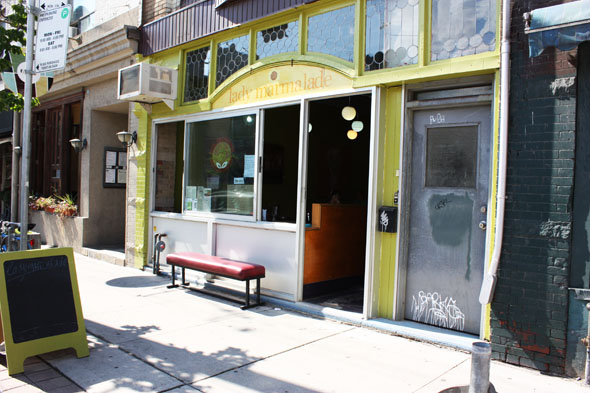 The final song of the set, “No Happy Birthday,” was one from his latest release. Hayden told the audience that this song is about his daughter who was born with a chromosome deletion causing developmental disabilities, including the inability to communicate verbally. The lyrics of the song reveal a sad but beautifully crafted tribute. Hayden attested that the song is perhaps not as sad as it may appear on the surface; however, he seemed to be slightly choked up while performing it. For those watching, it was an opportunity to witness yet another layer peeled away from the often private and protected core of a true artist.