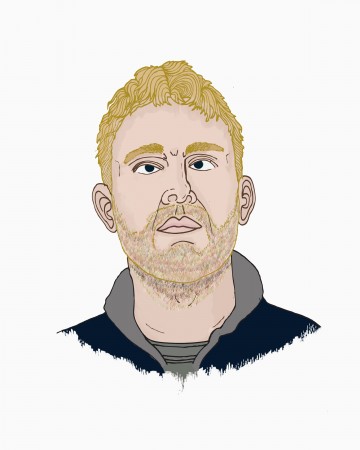 Damon Albarn is an English musician, singer-songwriter, multi-instrumentalist and record producer. He is best known for being the frontman of the Britpop/alternative rock band Blur as well as vocalist and principal songwriter of virtual band Gorillaz.

Raised in Leytonstone, East London and around Colchester, Essex, Albarn attended Stanway Comprehensive School, where he met Graham Coxon and eventually formed Blur whose debut album, Leisure, was released in 1991 to mixed reviews. After spending long periods of time touring the United States, Albarn’s songwriting became increasingly influenced by British bands from the 1960s. The result of these influences came in the form of Modern Life Is Rubbish (1993), Parklife (1994) and The Great Escape (1995). All three albums received widespread critical acclaim while Blur gained mass popularity in the UK, aided by a rivalry shared with Oasis. Subsequent albums contained influences from lo-fi, electronic and hip hop music.

In 1998, Albarn along with Tank Girl creator Jamie Hewlett, formed the “virtual band” Gorillaz. Drawing influences from hip hop, electronica, dub and alternative rock, the band released their self-titled debut album in 2001 which was hugely successful worldwide. Although Albarn is the only permanent musical contributor, the albums feature many collaborations from a wide range of artists. Gorillaz are cited by the Guinness Book of World Records as the “Most Successful Virtual Band”.

Other projects include working with African musicians in aid of the charity Oxfam, writing and performing lead vocals on The Good, the Bad & the Queen as part of an unnamed supergroup featuring Tony Allen, Paul Simonon and Simon Tong and composing film soundtracks. He has also ventured into the world of opera with Dr Dee and Monkey: Journey to the West.

A new studio album by Damon Albarn – his first solo record – titled Everyday Robots will be released by Parlophone on 29th April 2014. Recorded last year at Albarn’s West London studio 13, Everyday Robots is produced by Richard Russell of XL, with whom Damon produced Bobby Womack’s The Bravest Man In The Universe – and features guest appearances from Brian Eno and Natasha Khan (Bat For Lashes).

Led by title track “Everyday Robots”, the 12 songs here invite the listener into Albarn’s world for a genuine ‘one-to-one’ and are the most soul-searching and autobiographical since his musical journey began: a career that started with Blur and spans Gorillaz, The Good, The Bad & The Queen, Mali Music, Monkey: Journey To The West, Dr Dee and Africa Express. The songs’ subject matter is more directly personal than before and is inspired by Albarn’s experiences from early childhood to now, including the trappings of our modern existence, computer games, mobile phones and nature versus technology.

Daniel is an illustrator/graphic designer based out of Austin Texas. He graduated from Pratt Institute with a Bachelors degree in Illustration and an Associates degree in Graphic Design. Daniel started his career in graphic design in the world of online casinos. Since then he’s worked with various clients from around the United States and Canada including but not limited to NHL, Subway, Paraco Propane, Pitney Bowes, Xerox, Conduent, Nestle Waters, The Spill Magazine, Stamford CT’s DSSD, Beechnut Baby Foods, Elizabeth Arden and much more.
RELATED ARTICLES
damon albarndaniel adamsportraits
6.0

by SPILL NEWS on June 1, 2018
GORILLAZ ANNOUNCE NEW ALBUM THE NOW NOW A brand new studio album from Gorillaz titled The Now Now will be released by Parlophone Records on 29th June. The Now Now is 11 all-new songs from the World’s Most Successful [...]
8.0

by Kysan Kwan on April 28, 2017
Gorillaz Humanz Parlophone It’s safe to say Gorillaz is one of the quirkiest and most enigmatic acts out there today. The virtual hip-hop band, after seven years, makes their comeback with Humanz, [...]
8.0