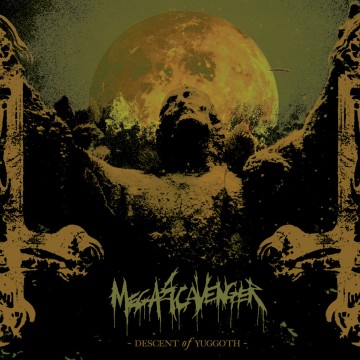 Megascavenger is the brainchild of Swedish Death Metal icon Rogga Johanson. Johanson’s also responsible for delightfully brutal bands such as: Paganizer, Ribspreader, Demiurg, The Grotesquery, Bone Gnawer, Revolting and many others. Megascavenger’s brand of Death Metal is low-end heavy, groove-laden slabs of meat with haunting, phantasmagoric leads swirling on top of a thick viscous stew of boiling flesh and sinew. This is the soundtrack for a reanimated corpse, clawing its way to freedom from a rain drenched, earthen grave. It’s brutal, it’s exciting and it hits the “Fuck Yeah” button. Megascavenger harkens back to those glorious early Floridian Death Metal days circa ’93 to ’95.

Descent Of Yuggoth is a well-executed Metal endeavor and is very enjoyable. However, I can’t shake the feeling that I’ve heard this all before. It’s like this little nagging voice in the back of my head… ‘This track is catchy as hell, and it gets me fired up, but it sounds like old Suffocation, or it sounds like Bloodbath, and hey, this is very reminiscent of some of Six Feet Under’s best material’. Put another way, there is no new territory being conquered on this release. The very thing that I admire about Descent Of Yuggoth is it’s loyalty to the old school, which is the very same thing that is holding it back. The track needs a little something extra to separate it from the horde. Once this element is found, this creature will be a truly horrifying plague on mankind.